Home movie-and-tv-shows From "Westworld" to "The Lord of the Rings," Ten Television Series To Watch In 2020

From "Westworld" to "The Lord of the Rings," Ten Television Series To Watch In 2020 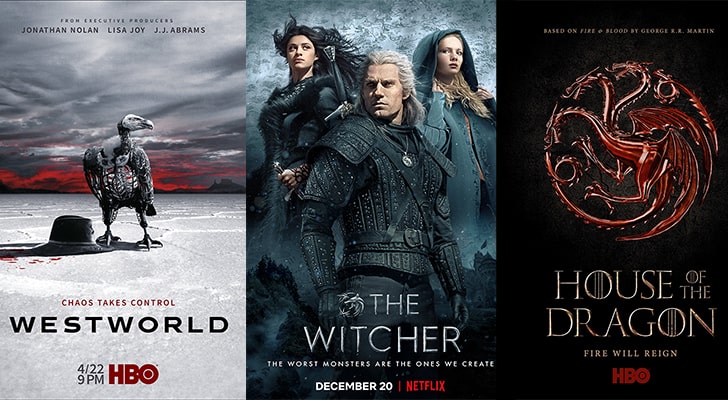 The year 2019 has almost come to an end. Films like Avengers: End Game, Once Upon a Time in Hollywood, and The Souvenir; and the television series like Game of Thrones, Stranger Things, and Fleabag made a great business as well as remained some of the fans favorite in 2019.

So, today on the deck, we have come up with 10 most-awaited television series that will be released in 2020.

Based on 1973’s eponymous film, Westworld is created by Jonathan Nolan and Lisa Joy. The HBO science-fiction series is also believed a sequel of the 1976 film, Futureworld, to some extent. The series includes Evan Rachel Wood, Thandie Newton, Jeffrey Wright, Luke Hemsworth, and Tessa Thompson in the star cast. The first season of the series was released between October 2 and December 4, 2016, while its second season was broadcast from 22nd April to 24th June 2018.

In May 2018, the series was renewed for the third season titled The New World. This season, Westworld would only consist of eight episodes, and the series is scheduled to be released in the first half of 2020. As previously reported filming for the third season began in March 2019, where this time, the filming locations also included Singapore.

After receiving a series of complaints about the complex narrative of Season 2, the creators are bringing a much more comprehensive storyline in the third installment. Nolan said, “This season is a little less of a guessing game and more of an experience with the hosts finally getting to meet their makers.”

Based on the multibillion-dollar eponymous film series, Fast & Furious: Spy Racers shows a teenager Tony Toretto, who follows in the footsteps of his cousin Dom, and his friends’ journey after they are recruited by a secret government agency to infiltrate a notorious racing gang.

The first season of the Spanish mystery series, High Seas (Alta Mar), was released on Netflix in May 2019. The show starring Ivana Baquero, Alejandra Onieva, Jon Kortajarena, Eloy Azorín, and Chiqui Fernández was renewed for the second season in June 2019. After the release of the second season in November 2019, the show was again renewed for the third season, which will be released in 2020. The creators have also announced that the fourth season is also in development.

The series follows the voyage of two sisters from Spain to Brazil following the death of their father in the late 1940s. The sisters then become embroiled in investigating mysterious deaths that occur at sea.

As per the official report, the first season of the series is scheduled to premiere on January 23, 2020, and will consist of ten episodes. Moreover, the series has also been renewed for the 10-episode second season ahead of the premiere.

American fantasy web series, The Witcher is based on eponymous book series by Polish writer Andrzej Sapkowski. The series, which stars Henry Cavill, Anya Chalotra, Freya Allan, MyAnna Buring, and Joey Batey, was premiered on Netflix on December 20, 2019. Ahead of the release of the first season, the series was renewed for the second season on November 13, 2019.

The series follows a tale of Geralt of Rivia, a solitary monster hunter who struggles to find his place in the crowded world where humans are often more wicked than monsters and beasts.

Messiah is one of the most anticipated web series to come in 2020. The thriller web TV series will consist of ten episodes and will be released on Netflix on 1st January 2020. Tomer Sisley, Mehdi Dehbi, Michelle Monaghan, John Ortiz, and Lavie Owen are some of the stars of the series.

4. House of the Dragon

Game of Thrones stands as one of the most loved television series of all time. The series ended with its eighth season in 2019, but there are still a lot more to come. Meanwhile, HBO has officially released the teaser for the ten episode-season of GOT prequel, named House of the Dragon. Though it is yet to be confirmed the official release date, several outlets have speculated it to be in early 2021.

The first season of the series will depict the ancestors of the GOT character Daenerys Targaryen played by Emilia Clarke.

3. The Falcon and the Winter Soldier

The Falcon and the Winter Soldier is one of Marvel’s upcoming superhero television series. The miniseries is created for Disney+ by Malcolm Spellman, which would be based on the Marvel comic character Sam Wilson/Falcon and Bucky Barnes/Winter Soldier.

The series stars Anthony Mackie, Daniel Bruhl, Sebastian Stan, Emily VanCamp, and Wyatt Russell and is directed by Kari Skogland. The series is expected to be released in late 2020, however, the official release date is not revealed to date.

American drama web television series, Stargirl, is one of the series to look over in 2020. The series is based on the DC Comics superhero Stargirl created by Geoff Johns and Lee Moder. The star cast of the series includes Brec Bassinger, Luke Wilson, Anjelika Washington, Yvette Monreal, and Neil Hopkins, among others.

It follows a story of a high school sophomore Courtney Whitmore who discovers her step-father used to be a hero sidekick. Later she becomes the inspiration for a new generation of superheroes. Stargirl is set to premiere on DC Universe and The CW in early 2020.

1. The Lord of the Rings

Based on the eponymous film series, The Lord of the Rings would be one of the most-watch series in 2020. While the first season of the series is still impending, it has already been renewed for the second season. The star cast of the series has not been revealed yet, however, it has been reported actor Joseph Mawle is cast as a villain. The other reported star cast of the series are Maxim Baldry and Markella Kavenagh.

The series made a hype in 2017 November after Amazon Studios acquired global television rights to The Lord of the Rings that included a multi-season commitment to a Lord of the Rings series as well as a potential spinoff series. The release date for the first season of the series is yet to be revealed.