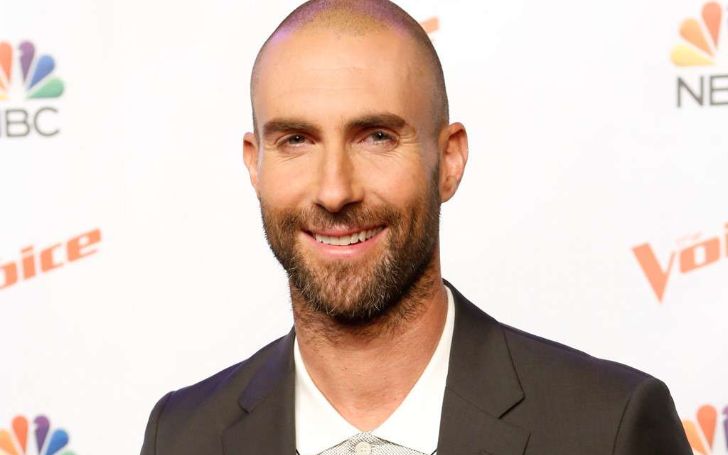 Born and raised in Los Angeles, Adam Noah Levine is the frontman for the pop-rock band, Maroon 5. His career started in 1994 and after he co-founded the band Kara’s Flowers, of which he was the lead vocalist and guitarist.

Adam Levine was born on March 18, 1979, in Los Angeles to Fredric Levine and Patsy (née Noah) Levine. His father was the founder of retail chain M. Fredric and his mother was an admissions counselor.

Levine has a brother named Michael Levine, two half-siblings, Sam Levine and Liza Levine, and a step-sister, Julia Bartolf Mine. His parents divorced when he was seven; after the divorce of his parents, he grew up spending weekdays with his mother and weekends with his father.

Adam Levine has covered most of his upper-body parts with tattoos. He has been adding tattoos to his body for years.

Following their break up, Levine started dating Behati Prinsloo, a Namibian Victoria Secret’s model, in May 2012. The couple had a private wedding ceremony on July 19, 2014, with Jonah Hill officiating the ceremony.

The pair shares two daughters; Dusty Rose, born on September 21, 2016, and Gio Grace, born on February 15, 2018. He currently resides in Los Angeles with his wife and kids.

Adam Levine’s Net Worth And Career

Adam Levine currently owns a net worth of $90 million. He has earned a huge amount from his career with Maroon 5 as well as a judge on the singing reality show, The Voice. Judging on The Voice, he made around $13 million per season. He has the second most victories, with his contestants winning in first, fifth, and ninth seasons.

Levine started his career in 1994, forming a garage band Kara’s Flowers, along with Mickey Madden, Jesse Carmichael, and Ryan Dusick. The band broke up due to their studies.

Maroon 5’s first album, Songs About Jane was released through Octone Records. The album grew in popularity, becoming one of the highest-selling albums in 2004.

With Maroon 5, Levine achieved huge success as well as a lot of fame. Most of the singles released by Maroon 5 peaked at the top on Billboard charts. His singles such as Moves Like Jagger and Stereo Hearts reached the top 5.

Most recently, he has performed during the Pepsi Super Bowl LIII Halftime Show at Mercedes-Benz stadium, Atlanta, Georgia, on February 3, 2019. Her daughters also watched their dad perform and seemed to enjoy it.

Levine owns a mansion in Los Angeles, which he sold for $13.5 million to fellow singer John Mayer. Likewise, he owns a house in Beverly Hills, which he purchased for $35.5 million from Will and Grace creator Max Mutchnick. Max Mutchnick bought it from tennis legend Pete Sampras for $23 million in 2008.