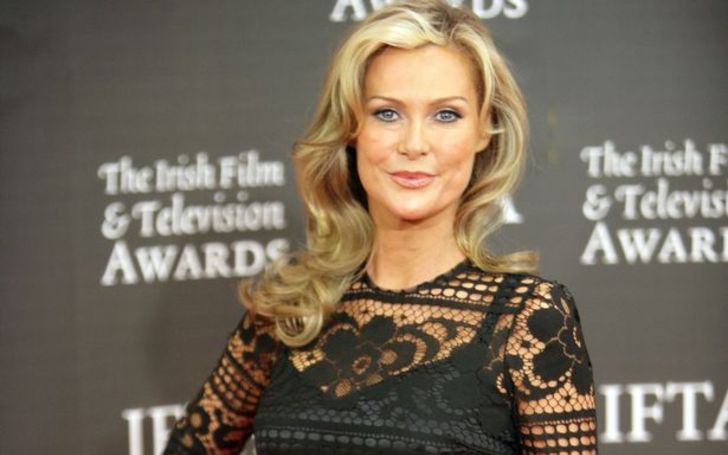 Popular for the role in the American adventure action film Indiana Jones and the Last Crusade, Alison Doody is an Irish actress and model earned name and fame from her works in the movies and TV shows. She was married to Gavin O’Reilly in 1994 and together, they shared two daughters. They divorced in 2006. Her ex-husband is a CEO of the Independent News & Media.

Alison was born in Dublin, Ireland on 11th November 1966, with the birth sign Scorpio. She was born as the youngest of three children to father, Patrick, and mother, Joan.

Doody holds Irish nationality and belongs to White ethnicity. Regarding her education, she attended Mount Anville Secondary School and later, enrolled in National College of Fine Arts for a year.

Talking about her personal life,  Alison is a divorcee. She was married to the CEO of the Independent News & Media, Gavin O’Reilly.

However, the marriage didn’t work out and the pair separated in 2004. They officially divorced in 2006.

As of now, Alison is living a single and low profile life. Alison might be dating someone however, she has not disclosed any information regarding her love life.

In 2011, while filming comedy-drama, Beaver Falls in South Africa, she met Douglas De Jager, a packaging tycoon from Cape Town. The duo kept their relationship low-key for months, before the death of De Jager in July 2012, due to a heart attack.

Alison Doody’s net worth is $4 million at present. She gardens her fortune from her acting career as well as a modeling career.

Although she has not disclosed her exact salary, she surely earns an average salary of around $50,313 as an American actor.

Alison initially started as a commercial model which later, extended to an acting career. She has worked in several movies and tv series throughout her career.

Her notable works include A View to a Kill, A Prayer for the Dying, The Secret Garden, Taffin, Indiana Jones and the Last Crusade.

Her other notable tv series include The Storyteller, Selling Hitler, The Clinic, Waking the Dead and several more.