Home movie-and-tv-shows Andy Samberg's Brooklyn Nine-Nine Is Coming Back With A New Season: It's Storyline Along With The Cast Members, Reviews, And Awards

Andy Samberg's Brooklyn Nine-Nine Is Coming Back With A New Season: It's Storyline Along With The Cast Members, Reviews, And Awards 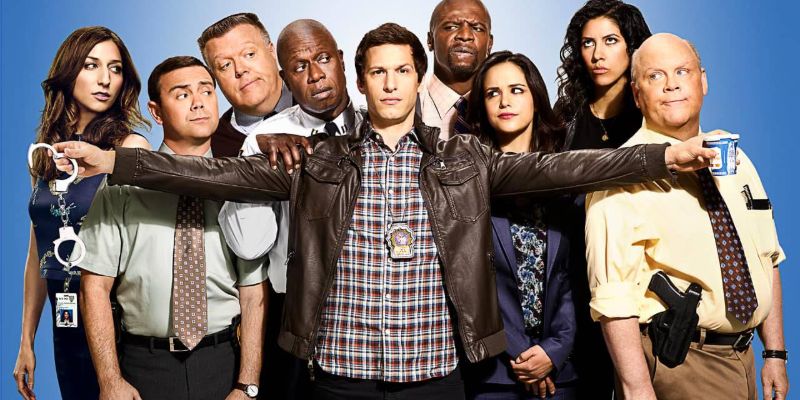 An American show Brooklyn Nine-Nine is a comedy centric series that features the protagonist as a police officer. Dan Goor and Michael Schur, who created the show, have previously worked together in the television series Parks and Recreation.

In 2012, the production company, Universal Television, approached four major broadcasting companies: ABC, NBC, CBS, and Fox to air the show. But eventually, the show started broadcasting via Fox and ran its five-season.

Moreover, Fox had also stretched the first season to 22 episodes as it originally ordered 13 episodes.

However, after five seasons, Fox canceled the show despite the show receiving two Golden Globe Awards, with one being for the category best Television Series – Musical or Comedy. The Fox reportedly decided to so because of the low-rating it received after season 3.

The average rating of the show subsequently decreased, with the lowest being season 5. According to the Entertainment Weekly, Fox also wanted to prioritize the animated series Bob's Burgers, which aided in the decision to cancel Brooklyn Nine-Nine.

After the cancellation, few networks like TBS, Hulu, Netflix showed interest in reviving the show. Nevertheless, NBC stepped in to rescue the series just the day following the cancellation. This marked the third Michael Schur's series to be aired by the network.

Ironically, NBC had initially refused to air the first series to which Fox became the ultimate savior.

The series revolves around the challenges detectives face in daily life with the touch of action, adventure, and comedy wrapped up in a perfect combination to arouse the interest of the viewers.

The main protagonist, Jake Peralta, has a carefree personality. But his cheerful disposition is soon disrupted when a new commanding officer, serious and strict Captain Ray Holt, is appointed.

What's interesting is that Peralta's love interest, Amy Santiago, has an exact opposite personality. She is someone that lives by the law and a serious workaholic. Amy hopes to be mentored by her boss Ray Holt, in her pursuit of becoming a captain.

Nevertheless, the dynamic personality of each character provides a humor-filled story that surely can make the audience glued to the screen for a good 21 minutes.

Saturday Night Live alumni, Samberg, joined the cast of Brooklyn Nine-Nine in 2013. In addition to playing the protagonist, he is also a producer of the show.

Andy's character Jacob Peralta is a mixture of intelligent and immature, who has been a detective in Brooklyn's 99th Precinct since 2005.

Despite being talented and perceptive, Peralta's actions are often motivated by his emotions and hence comes off as arrogant. Also, he never had to work hard or play by the book because of his best arrest record.

Interestingly, Jake's happy-go-lucky attitude is disrupted when a new commanding officer enters the precinct. A lot of change happens in Peralta's life after a new officer joins the department. He also develops a soft corner for his partner, who happens to be a sergeant.

Argentina-American actress Stephanie Beatriz plays the tough guy character, Rosalita Diaz. Rosa is given the tagline badass as she has a scary, difficult to read, and smart persona. Most of her co-workers are frightened by her anger issues.

Diaz and Peralta were a classmate in the police academy, which formed a friendship between two.

Rosa's love-life is full of ups-and-downs. Nevertheless, she takes pride in her mysterious appearance and is a tough cookie. It is revealed in "White Whale," 21st episode of the 5th season, that Diaz had attended medical school, business school, and has a pilot's license.

Moreover, she was kicked out of the ballet class for "beating up the ballerinas." No wonder all of her colleagues are terrified by her!

Despite having a rough childhood, Jeffords is a doting father to his three young daughters Cagney, Lacey, and Ava. He stands six-feet tall and is a keen bodybuilder. Nevertheless, Jeffords comes off as a wimp because of the constant fear of leaving his children fatherless, given the danger of police work.

Usually seen with a tie and suspenders, Terry's addiction to food led him to break a restaurant window. After the incident, he came up with the idea to stick his head in ice water to resist the food temptation.

An intelligent and well-organized character, Amy is always trying to strive for the best. Her competitive personality often clashes with her love-interest, Jake Peralta.

Santiago almost acts like a teacher pet to her mentor to get admiration making her target of jokes.

Amy's primary goal is to become the youngest person to be appointed as a captain. In the 5th season, she becomes the youngest woman to pass the Sergeant's exam.

Joe Lo Truglio aka Boyle may not be that brilliant, but he definitely is a hard-working character. He has an optimistic persona but is very critical when it comes to food. Needless to say, he is critical of everything!

Boyle has a brotherly relationship with Jake Peralta and develops jealousy at the concept of being replaced by Peralta. He also keeps meddling in Jake and Amy's relationship.

Despite his clumsiness, he has often shown himself to be extremely brave. Boyle once threw himself amongst the armed criminal when he realized that Rosa was about to be shot by that criminal. The bravery nearly cost him his life.

Regina played by Chelsea Peretti is obsessed with social media and appears clueless in most of the situation. She was a childhood friend of Jake Peralta. Gina worked as an assistant manager before she joined the 99th precinct.

Nevertheless, Linetti has shown the capability to be observant and financially responsible in later episodes.

After leaving 99th Precinct, she joined Captain Ray Holt but again returned to her old post in the 4th episode 'The Oolong Slayer' of the 3rd season.

But she left the job at the end of the third episode 'The Tattler' of season 6. The fourth episode 'Four Movements' of season 6 marks her last regular appearance.

Though he gives the appearance of stoic and staunchly, who is a stickler for the law, Holt is a kind-hearted and empathetic person.

Despite being criticized by his colleagues for not showing emotion, he is highly regarded by them for his work ethics.

Andre Braugher aka Holt achieved his dream of being promoted to captain after another captain, McGinley, retired from the position.

On the first day of assignment at 99th Precinct, he humiliated Jake Peralta for his lack of professionalism and later helped Peralta in taking his responsibility maturely.

Micahel is the oldest detective of the 99th precinct. He mostly prefers his comfort to those around him.

He is best friends with another detective Norm Scully who happens to be as lazy as him. They both have worked together for almost 30 years.

However, it is implied in some instances that Hitchcock had once been a much better, hard-working detective than he is in the present day.

Like his partner Michael, Scully is a middle-aged, work-shy with a habit of disclosing disgusting medical issues to his colleagues.

He often embarrasses himself and ends up claiming he is unconcerned about others judging him. In Episode 18, "The Apartment" of Season 1, it is revealed that both together had made just fourteen arrests in a year to which Terry says 'six more than last year.'

Though lazy, he can speak French, sing opera, and can understand Morse Code.

Reviews Of The Series Brooklyn Nine-Nine

Brooklyn Nine-Nine reviews are filled with positive comments. No wonder the show went on even after the cancellation.

According to IMDb, the show has an 8.4/10 rating, with most reviewers giving it a 10 out of 10 ratings. The first season of the series received a weighted average score of 70/100 from Metacritic.

The show holds a 97% rating on Rotten Tomatoes. It gave a 100% score to the second season based on 17 reviews. Moreover, Common Sense Media gives an approval rate of 4/5.

Brooklyn Nine-Nine has received positive reviews for the depiction of issues related to the LGBTQ community without losing the comical aspect.