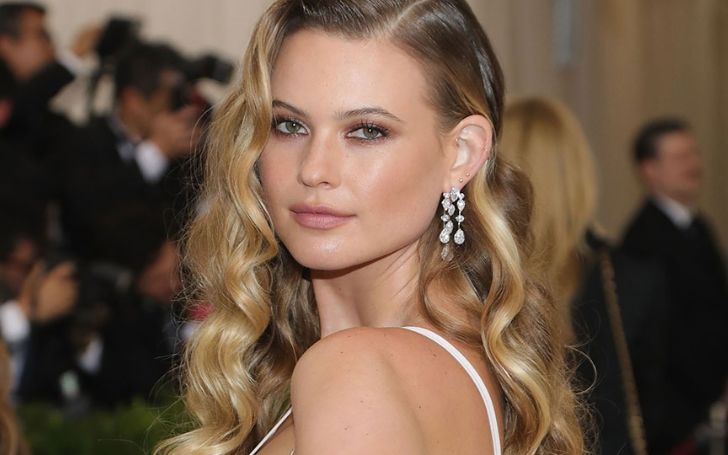 Victoria’s Secret model, Behati Prinsloo has walked in ten consecutive Victoria’s Secret Fashion shows. She is a Namibian model who became the first contract model of Pink in 2008. Well, she is famous as a wife of the frontman of the pop-rock band, Maroon 5, Adam Levine. The pair has been married since 2014 and shares two children.

Behati Prinsloo was born on May 16, 1988, in Vanderbijlpark, South Africa. She is Taurus, which describes her as ambitious. She is the only child of Louis Francois “Boet” Prinsloo and Magda (née Rossouw).

She grew up speaking Afrikaans and received an education in English. Behati studied at Grootfontein Secondary School and left her education to pursue her career in modeling.

Behati Prinsloo is married to her boyfriend turned husband, Adam Levine, lead singer of the pop-rock band, Maroon 5. The couple started dating in 2012; later, the pair decided to take their relationship a step forward and got married. They had a private wedding ceremony on July 19, 2014, Mexico, with actor Jonah Hill officiating the ceremony.

The couple shares two kids; they welcomed their first child, a daughter Dusty Rose on September 21, 2016. She announced her second pregnancy on September 13, 2017, via her Instagram account.

Her husband, Levine also announced on The Ellen DeGeneres Show that they were expecting a girl. She gave birth to their second child, a daughter Geo Grace on February 16, 2018. Levine previously had a relationship with Russian Sports Illustrated swimsuit cover-model Anne Vyalitsyna. They ended their relationship in April 2012.

Behati Prinsloo’s net worth is $9 million at present. Debuted her career as a Prada/Miu Miu Exclusive, she was photographed by Mario Testino and Paolo Roversi for British Vogue. As a professional model, she has earned a huge amount and maintained such an impressive net worth.

In addition to her modeling career, she starred on 3 December “Ha’awe Make Loa” episode of CBS’ Hawaii Five-0 playing themselves. Also, she has appeared in various music videos such as Maroon 5’s Animals, Cold, Wait, and Girls Like You and The Virgins’ Rich Girls.

Behati Prinsloo is active in social works; she has started a charitable trip to Haiti, following the irreparable damage caused by a devasting earthquake in 2010.