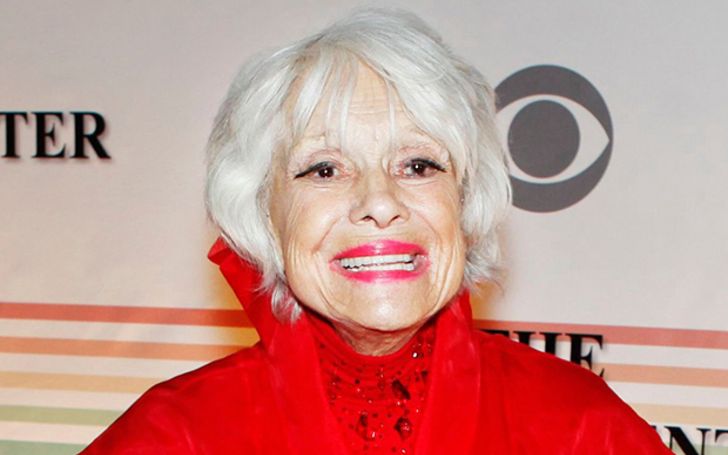 American actress, singer, and dancer, Carol Elaine Channing aka Carol Channing was famous for her starring roles in Broadway and film musicals for over the decades. She is best known for her appearance in the Gentlemen Prefer Blondes(1949). For her talent and hard work, she has won Golden Globe Award for her role in Thoroughly Modern Millie and Tony Award for Hello, Dolly! The talented Hollywood star died in the year 2019.

Carol Channing was born under the birth sign Aquarius on January 31, 1921, in Seattle, Washington, the U.S as Carol Elaine Channing. She is only one daughter of Adelaide and George Christian Channing.

The legendary Broadway actress, Carol Channing died on January 15, 2019, at the age of 97. As per her publicist, B. Harlan Boll to US Weekly, she died due to natural cause at her Rancho Mirage home at 12:31 a.m. She died just two weeks before of her 98th birthday.

His publicist shared that it is very heartache, that he has to announce the passing of Hollywood industry.

I admired her before I met her, and have loved her since the day she stepped … or fell rather … into my life. It is so very hard to see the final curtain lower on a woman who has been a daily part of my life for more than a third of it. We supported each other, cried with each other, argued with each other, but always ended up laughing with each other. Saying goodbye is one of the hardest things I have ever had to do, but I know that when I feel those uncontrollable urges to laugh at everything and/or nothing at all, it will be because she is with me, tickling my funny bone.

The late actress, Carol Channing was married four times in her lifetime. She was first married to Theodore Naidish in 1941 but they couldn’t continue their relationship for more than three years. After several years of single life, she married for the second time with Alexander Carson in the years 1953 and divorce in 1956.

In the same years of his second divorce, she married to Charles Lowe. The couple was together until the death of Charles in 1999. After four years of her husband died, she married at the age of 82 to her junior high school sweetheart, Harry Kullijian in 2003. Unfortunately, he died in 2011.

She is the mother of one son, Channing Carson who is a famous cartoonist. However, the detail regarding her son is missing.

Carol Channing’s Career and Net Worth

The late actress, Carol began her acting career while she was in her high school level. She got her first job at the age 19 years old as a theater actress. Later on, she worked in the Hollywood industry.

Even though, Carol Channing had 29 acting credits to her name, her most known movie is Thoroughly Modern Millie. For that movie, she got a nomination for the 1968 Academy Awards but she couldn’t win it. However, she won the Golden Globes Award for Best Supporting Actress for the movie.

Channing’s final appearance in TV shows and movies was in Family Guy in 2006.

Carol Channing had the net worth of $25 million which she has collected from her longtime career in the Hollywood industry.

Don’t miss to have a look at the bio, net worth, career, relationship, children of Brandon Soo Hoo, Theo James, Rory Culkin.