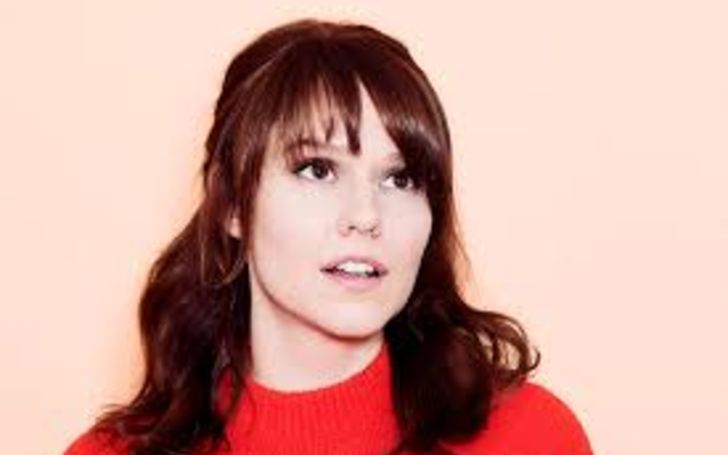 Claudia O’Doherty is an actress, writer, and comedian who became well known for her starring role in the Netflix original series Love. Previously, she was seen in Inside Amy Schumer, a sketch series in which she was also a writer. The beautiful lady is the winner of Melbourne Fringe Best Comedy Award and the Brisbane Comedy Festival Award for her show Monsters of the Deep.

Claudia O’Doherty was born on November 29, 1983, in Sydney, Australia under the birth sign of Sagittarius. She holds an Australian nationality and belongs to a white ethnic group. She is the daughter of Reg Mombassa and Martina O’Doherty.

The 35-years-old actress is possibly single at the moment. She is neither married nor dating anyone at the moment. Well, the stunning Claudia prefers keeping her personal life in a low profile.

O’Doherty likes spending her spare time enjoying with her family and friends. As of now, it seems that she is busy building her career rather getting in romantic love affairs.

However, the charming star has not talked about her love life in interviews as well. Seems like she is happily living a single life.

Claudia O’Doherty’s Net Worth and Career

O’Doherty has an estimated net worth of $200 thousand which she garnered from her career in acting. The average salary of an Australian actress earns $30.20 per year and $37, 500 annually. With such net worth, she is living a lavish lifestyle.

In addition, Claudia O’Doherty has appeared in the romantic comedy movie Trainwreck in 2015. The film was made under a budget of $35 million and grossed more than $140.8 million at the box office.

she appeared in the 2017 techno-thriller movie The Circle. The film featuring Emma Watson and Tom Hanks collected $40.7 million. It was made under the budget of $18 million.

The actress started her career as a comedian with small-time stand-up performances at Sydney University Arts Revue. While performing at the Arts Revue, she was introduced to Nick Coyle and Charlie Garberher.

In 2009, she was honored with Melbourne Fringe Best Comedy Award and the Brisbane Comedy Festival Award for her first professional show, Monster of the Deep 3D.

Claudia O’Doherty made her television debut in a short Australian comedy series, Problems in 2012. Later, she moved to London in pursuit of better profession opportunities. She made a series of short webisodes for Britain’s Channel 4 called What Is England?.

In 2015, she starred in the role of Wendy in the film. Also, she worked as a writer in the sketch comedy series, Inside Amy Schumer and also played in a few episodes of the series. Her appearance in the series earned an Emmy nomination.