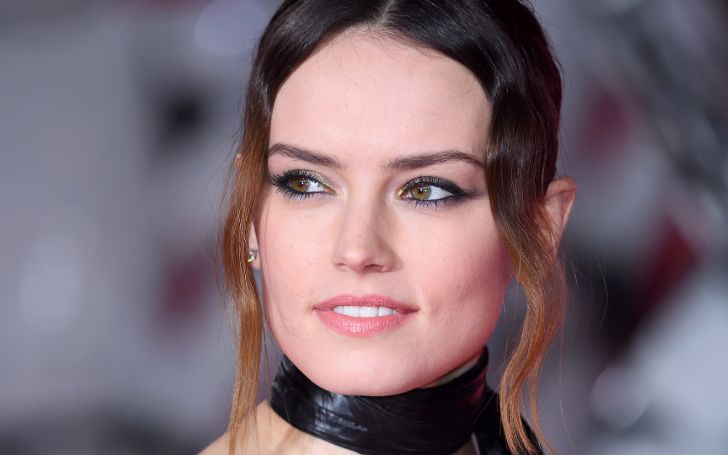 The English actress and producer, Daisy Ridley who is famous for her Star Wars: Episode VII – The Force Awakens started her career back in 2013 from a minor role. Mostly she used to make guest appearances during her early career days but her skill and talent were enough to make her famous in a short period of time.

Daisy Ridley was born as April 10, 1992, and is aged 26 as of early 2019. She was born to parents; father Chris Ridley, and mother Louise Fawkner-Corbett in Westminster, London. Her birth name is Daisy Jazz Isobel Ridley.

She has two older half-sisters: Kika-Rose Ridley and Poppy Sophia Ridley from her father’s previous marriage.

Regarding her education, she completed her school level from Tring Park School and later on joined the University of London to read classical civilization but later on dropped out to focus on her acting career.

The Star Wars star, Daisy Ridley has three outlined stars tattooed on her left foot which she made it when she was just fifteen years old. As per her the design she made at the moment was like some kind of fatalistic thing. At that time, her parents were not happy with her inking.

In addition, she has also once shown her tattoo with a high-cut swimsuit. She has a triangle shape tattoo on her line on top with the symbol for the element of air in alchemy. The symbol is believed to be of the spiritual awakening.

The 26 years old Daisy Ridley is currently in a romantic relationship with boyfriend, Tom Bateman (British actor). Tom and Daisy who were seen together hand in hand in November 2016 and have confirmed their relationship in late 2017. Their relationship became even closer after they appeared together in the movie, Murder on The Orient Express.

Before that, she was dating in the relationship with Charlie Hamblett (British actor). The couple started dating each other since 2015 but broke up after shortly. There were also rumors regarding her relationship with John Boyega.

Daisy Ridley’s Net Worth and Career

Daisy Ridley’s net worth in the year 2019 is reported to be around $6 million. In 2016, she was listed in 30 under 30 in Forbes magazine and listed number six in 2017 as one of the highest-grossing actors. Although she has not disclosed her exact salary it is obvious that she must be earning more than the average salary of $50,270.

She started her career back in 2013 appearing in the minor role in television series. She has an appearance in the series Casualty, Silent Witness, Toast Of London with a small role. In 2015, she debuted in Hannah Kennedy and for her role, she received the Zed Fest Film Festival Award for Outstanding Acting Performance.

Her career takes a breakthrough after she got the opportunity to work in movie Star Wars: The Force Awakens with the role of Rey in 2015. Later in 2016, she produced the movie The Eagle Huntress.

In her half-decade career in acting filed, she has been able to win the several awards including Empire Awards, Teen Choice Awards, MTV Movie Awards, and Florida Film Critics Circle.

Don’t miss to have a look at the biography, net worth, career, relationship, children, husband, affairs, and wife of Breaunna Womack, Lori Heuring, and Parisa Fitz-Henley.