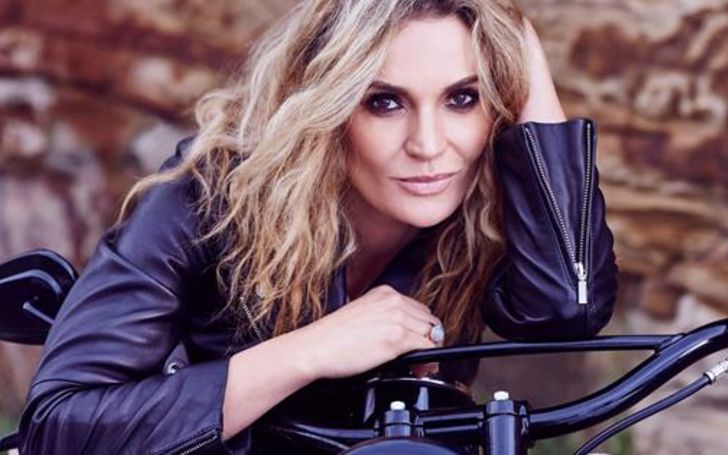 Danielle Cormack is an actress who is known for her starring role as Alison Raynor on the soap opera Shortland Street. Besides, she is also popular for her role as Amazon Ephiny in Xena: Warrior Princess. For her leading role in a New Zealand-produced series The Cult, Danielle won a Best Actress Qantas Television Award.

Danielle Cormack was born on December 26, 1970, in Auckland, New Zealand under the birth sign of Capricorn. She holds an American nationality and belongs to mixed ethnicity of French, Irish and German. There are no more details regarding her parents, sibling, and her educational background.

Danielle shared her wedding vows with a New Zealand actor of Maori, Pana Hema Taylor. The couple met each other when Cormack was the costume/set designer for a play. During that time, Pana was just 20 and Danielle was 38. They eventually started dating for a month and later they tied a knot in 2009.

Previously, she was also married to Hayden Anderson and they had a son named Ethan Cormack Anderson in 1996, but the date of their marriage or separation is not known.

Currently, Cormack is in a romantic relationship with her partner Adam Anthony. He is a Canadian director and producer. Till now, the couple is living a happily.

Danielle Cormack’s Net Worth and Career

The talented actress has an impressive amount of net worth $5 million. She mainly earns from her professional career as an actress, and screen actress. Also, she certainly earns way more than the average salary of an actress is $42,000 and $50,000 respectively.

In 1987, Cormack debuted in the acting industry from the TV series Gloss. She starred in a leading role of Alison Raynor from 1992 to 1993.

The talented actress starred on the 1993 short movie Snap and A Game with No he Rules. She played on the big screen in the movie The Last Tattoo in 1994. In the film, she made the role of Molly.

In 1993, she portrayed the character of Sylv in the play East. Her most notably performed on the theatre like Trainspotting, The Shape of Things, Caligula, Rock ‘n’ Roll, Top Girls, and many others.

In addition, she played the lead role of Scarlet Meagher in the American television show Rake from 2010 to 2016. Also, she was nominated for numerous awards and received the ASTRA Awards for Outstanding Female Actress (2015). She played on another Australian television series Jack Irish as Rory Finch, in 2018.