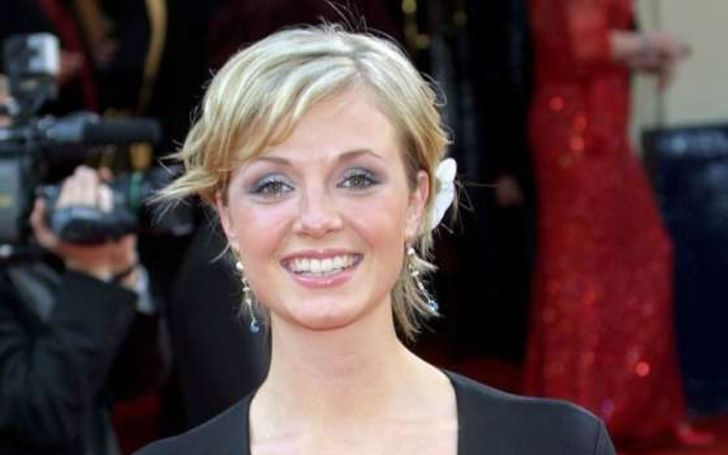 South African-born British actress, Elize Du Toit debuted as Izzy Davies in Hollyoaks. She is famous for appearing as Jenny, the former girlfriend of Matt Carter in Coronation Street in 2011. Besides that, she also grabs limelight of as a wife of the actor, Rafe Spall.

Elize Du Toit was born on February 21, 1980, in Grahamstown, South Africa under the birth sign, Pisces. She was born to patents, a mother, Susanne Du Toit who is an artist and an orthodontist father, however, her father identity is not revealed.

Du Toit spent her childhood days in Pretoria with her three siblings. In 1994, December she migrated to the United Kingdom and attended Wellington College. She enrolled at the University of Edinburgh and worked along with Edinburgh University Theatre Company.

39 years old Elize Du Toit is married to her boyfriend turned husband, Rafe Spall in 2010. Her husband is one of the most popular actors in the industry. The couple met for the very first time in the year 2008 in a bar through friends in London.

The pair started dating and after a couple of years, they decided to take their relationship in the next level and married and live in West Kensington, London. After a year, the adorable lovers welcomed their first child, daughter, Lena in 2011. Later, they again shared another child, a son, Rex in 2012, November.

As of now, Du is living a blissful and a healthy with her spouse and children. To date, there are no such rumors and news about their divorce and extramarital affairs as well.

The Line of Beauty star, Elize Du Toit earns an impressive sum of dollars and adds to her net worth, however, her exact net worth is under review. An average salary of the actor is $50,249 in the USA. She enjoys a net worth of $3 million which is owned by her life partner from his movies.

Toit debuted in 2000 with the movie, Hollyoaks. Some of her work credits include The Devil’s Chair, Doctor Who, The Bill, Casualty, Waking the Dead, Coronation Street, Skyfall, Line of Beauty and many more. She featured alongside Stacey Roca, Julia Brown, Colin Buchanan, Pippa Haywood, Jennifer James, Matt Berry, David Gant, Andrew Howard, and many more.