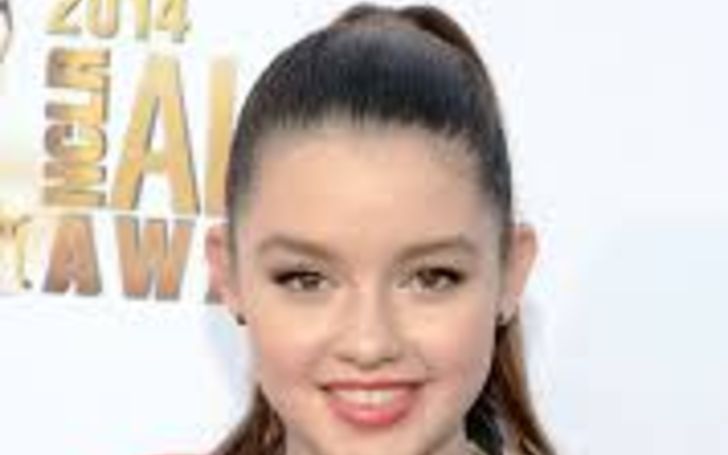 Fatima Ptacek is best known for playing the lead character in the 2012 Oscar winning movie Curfew. She is also popular for providing a voice for the lead role “Dora” in Nickelodeon’s animated television series Dora the Explorer since 2010 and Dora and Friends: Into the City! since 2014. She is also a model and human rights activist working with UN Women’s #HeForShe campaign for gender equality.

Ptacek was born on August 20, 2000, in New York City, NY under the birth sign of Leo. She holds an American nationality and belongs to a Mixed (Norwegian, Czechoslovakian, Irish, Colombian, and Ecuadorian) ethnic group.

#TBT …to when gymnastics was everything 🏆

Fatima is raised by her parents Lucia Ptacek (mother) and Jack Ptacek (father) in New York City. She has learned Mandarin Chinese(language).

The 18-year-old lady is not married yet. Previously, she was in a relationship with Regan Mizrahi in 2015. But they couldn’t push their relationship for a long time and they separated.

Since then, she has not dated anybody publicly yet. Fatima keeps her personal life so secret that nothing related to her present status is published. Currently, she is possibly single and enjoying her single life. It seems like she is focusing on her career rather than her love affairs.

Fatima Ptacek’s Net Worth and Career

The young model and actress have an estimated net worth of $1 million as of 2019. She has earned a decent amount of salary from her career.

Apart from her career, Fatima makes a good sum of money from her social media; Instagram. According to a reliable source, her estimated earnings per post is in between $140.25 – $233.75. Moreover, she also earns a gigantic sum from the endorsement deals and commercial ads.

The beautiful actress started appearing in different ads. She has appeared in more than 70 T.V commercials. Ptacek made her T.V debut in the year 2007 and appeared in a successful T.V series titled “Busytown Mysteries” as ‘Sally’ and starred in the different role until 2010.

Moreover, she was given a three-year contract as Dora in Dora the Explorer, in November 2010. In 2014, she nominated awards for “Outstanding Performance in a Children’s TV Series”.

Fatima has done work with SAG Foundation’s BookPALS (Performing Artists for Literacy in Schools), and Reading Is Fundamental. She volunteers as a “Celebrity Ambassador” for the Elizabeth Glaser Pediatric AIDS Foundation.

Also, she has done work for the  Make-A-Wish Foundation in conjunction with the Macy’s Believe Campaign, and the Morgan Stanley Children’s Hospital.