Home health Five Hollywood Celebrities Who Got Breast Cancer Before 50

Five Hollywood Celebrities Who Got Breast Cancer Before 50 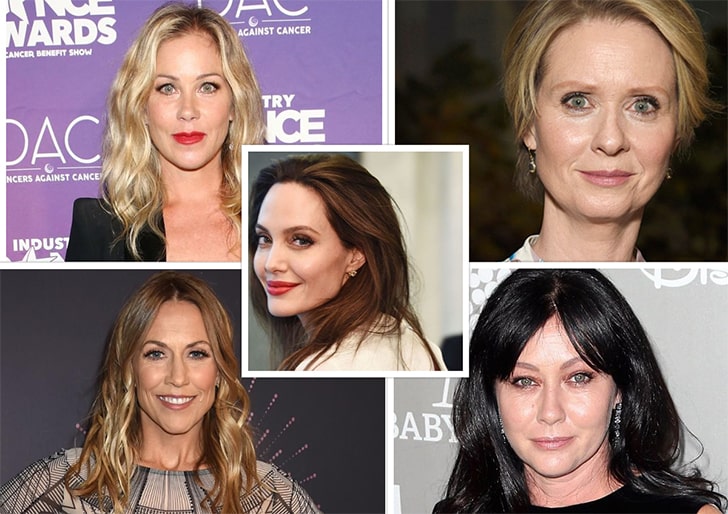 Many Hollywood celebrities have been diagnosed with different forms of cancers over the years. In such, some female stars caught the illness young. On today's episode, we are talking about five Hollywood actresses who got breast cancer before 50.

Famed actress Christina Applegate was diagnosed with breast cancer in 2008 when she was 36 years old. The Vacation actress promptly underwent a bilateral mastectomy [though cancer was found in only one breast] after finding out she carried the BRCA gene, also known as the "breast cancer gene." Her mother, Nancy Priddy, is also a breast cancer survivor.

Applegate's malignant tumor was found after an MRI scan, which was carried out after her doctor determine mammogram wasn't sufficient due to the denseness of her breasts. She was lucky enough to be diagnosed at early stages due to which it couldn't spread to other parts. On August 19, 2008, Applegate was announced cancer-free.

Sheryl Crow is a singer, actress, musician, and songwriter. The 57-year-old diva is best known for her appearance in films like 54, The Minus Man, and some TV series such as Cougar Town, Celebrity Name Game, and Match Game. The Grammy-winner was diagnosed with breast cancer in 2006 at the age of 44.

Crow was diagnosed in the early stage, and she soon underwent surgery. Her doctor then told her, "prognosis for a full recovery is excellent." After the surgery, Crow released a statement saying she would have to postpone her North American concert that was scheduled for March that year.

Actress Cynthia Nixon was just 35 when she was diagnosed with stage 1 breast cancer in 2002 during her routine mammography. Keeping her growing career in mind, Nixon kept her illness away from the public until April 2008. She secretly underwent lumpectomy and radiation therapy to cure her disease. In one of her interviews, Nixon said,

I've learned that if you catch breast cancer early, the chances are overwhelmingly good that you'll be cured. So my attitude, which very much mirrored my mother's, was this wasn't a big deal.

Her diagnosis came out in the media when she was approached by American cancer charity, Susan G Komen, for the Cur, to be their spokeswoman.

The charity, however, was unaware of the fact that Nixon herself was battling the disease and just approached her because Nixon had spoken openly about supporting her mother through breast cancer.

Famous for her role as Jenny Wilder in Little House on the Prairie, actress Shannen Dohertywas diagnosed with breast cancer in March 2015 that had spread to her lymph nodes. She was 44 when she found about the illness.

In February 2016, Doherty said she was receiving anti-estrogen treatment to shrink her tumor and enable cure by lumpectomy instead of mastectomy, however, due to the complication and presence of multiple tumors, she ultimately had to undergo a single mastectomy.

After the May 2016 surgery, her doctor found out some of the cancer cells might have spread beyond the lymph nodes. She then underwent chemotherapy and radiotherapy, but her cancer is now in remission.

Before we start, we are making clear Angelina Jolie has not been diagnosed with breast cancer. But why her name comes on the list? It's because Jolie, 44, underwent a preventive double mastectomy in 2013 after finding she had 87% chances of developing breast cancer. It was because she had inherited a defective BRCA1 gene from her mother.

Meanwhile, the actress underwent a preventive salpingo-oophorectomy after learning she had a 50% risk of developing ovarian cancer.