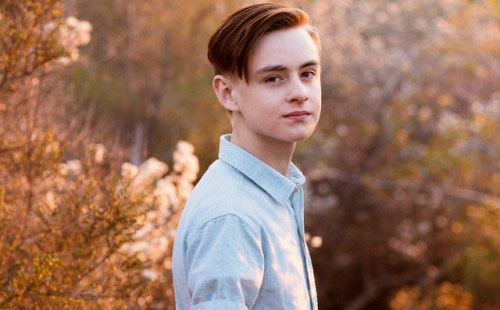 Jaeden Lieberher is a fast-rising American actor who has already earned awards for his entertainment prowess. Jaeden represented his first major feature film role as Oliver Bronstein in St. Vincent in the year 2014.

His performance in the movie helped him to receive a nomination for various prestigious awards. Jaeden is a kid actor from America for his roles in St. Vincent, Midnight Special, The Confirmation, and Aloha.

Moreover, he has also appeared as Bill Denbrough in the horror film It is 2017 and in season three of Masters of Sex. Jaeden would have never expected that this move will bring him to the world of modeling and act.

The cute and emerging actor, Jaeden Lieberher was born on January 4, 2003, in Pennsylvania, the United States as the son of Wes Lieberher and Angela Martell.

At the age of eight, he moved to Los Angeles along with his mother. From the early age, he had a keen interest in acting and he also appeared in a few commercials as well. Talking about his education, there is not any information about it.

Jaeden started his acting career after moving to Los Angeles. He began starring in a couple of commercials at the age of nine. He made his professional debut and landed the role of a young Chris Evans in “Playing it Cool” in the following year.

In 2014, Jaeden featured in the big hit movie St. Vincent along with some familiar names, Bill Murray, Melissa McCarthy, and Naomi Watts.

Moreover, he starred opposite to Bradley Cooper, Rachel McAdams, and Emma Stone in the 2015 movie Aloha. Furthermore, the talented actor has also acted with special powers in the 2016 movie named Midnight Special. Jaeden was cast in a leading role for the 2017 horror film It in the year 2017.

Thanks to everybody who visited us in Miami! Got to meet the most incredible people and received some beautiful art! Thank you. I’m so grateful for all of you!

Currently, he is working in the movie The True Adventures of Wolfboy which will release in 2018. Apart from this, he has also served in a couple of TV shows named American Dad and Masters of Sex.

Jaeden is single and also young to be in any relationship. There is not any a single rumor of his relationship and affair till now.

Jaeden has total focus on his work and it seems he doesn’t like to engage in any relationship stuff as a child actor. The rising actor doesn’t speak about his personal life in the public and media. Currently, Jaeden is single.

Young and cute, Jaeden has a height of 5 ft 5 inches and his weight is unknown. Furthermore, he has beautiful green eyes and blonde hair.

Being a reputed actor in such young age, Jaeden earns a decent amount of money from his profession.
As of 2018, Lieberher has an estimated net worth of $4 million. As per some online sources, Lieberher earned the tremendous salary from the movies.