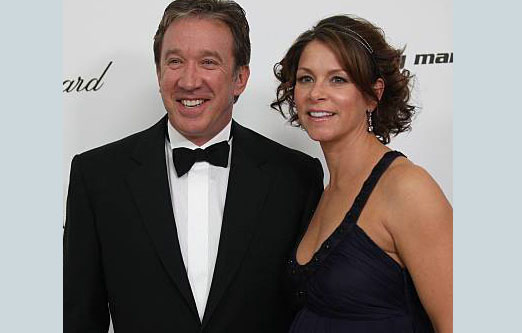 The lady with horoscope Scorpio has now reached the age of 51 years according to her date of birth. Hajduk was born in the USA, thus she has an American nationality and her ethnicity is white. Regarding her education, Jane has not disclosed yet in the media.

Jane Hajduk is a happily married woman and she shares her marital life with Tim Allen. The duo exchanged their vows and changed their love life into a successful marital life in October 2006. Their wedding took place in Grand Lake in an outdoor wedding ceremony.

Hajduk and Allen share a daughter named Elizabeth who was born on March 28, 2009. Although it was the first child to Jane, it’s the second one for Tim.

Jane Hajduk’s Net Worth and Career

The wife of Home Improvement star Tim Allen has appeared in numerous series along with her husband. She and her husband have appeared together in the series like The Shaggy Dog and Zoom. Her professional journey started in the year 1993 as Meagan in the film, Nothing Man, followed by her guest roles in the sitcom Chicago Hope as Lisa. Some of her notable films and series are Ty the Pie Guy, Benchmarks, Monk, NCIS, Chicago Hope, Entertainment Tonight, Sex Crimes, Nothing Man, Joe Somebody, The Shaggy Dog, Zoom, Nightmare, and so on.

Further, she has served as the voice actress in various animated films and series. In addition to that, she has played the character of g Researcher Taylor in the family superhero adventure comedy film, Zoom.

You also may like to read: Sophia Diamond, Zach Roloff.