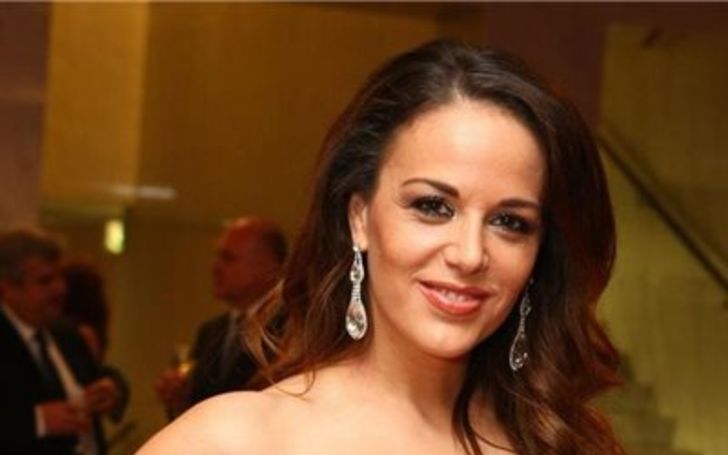 Karin Haydu is a Slovak actress. She made her acting debut in 1977 and has appeared in many Television shows, theaters, and local films. She is famous for featuring in American productions such as Peacemaker (1977), Kull Coqueror (1997), Dragonheart – New Beginning (2000). In addition, Haydu has hosted shows like Dancing on Ice, Dancing with the Stars, and Big Brother.

Karin Haydu was born in 1977, April 7 under the constellation sign, Aries in Bratislava, Czechoslovakia. She is the daughter of a father, Juraj Haydu and the mother, Maria Haydu.

Karin holds a Slovak nationality and belongs to the white ethnicity. She was raised along with her brother, Jurah Haydu Jr. She completed her school and high school in Bratislava, later, went to the Academy of Performing Arts to study acting.

Karin Haydu was married to Peter Antovsky. Though the exact date of their wedding is not revealed, as per the sources, the couple was together for many years until their divorce in 2008. Since the pair is very private nothing much is known about them.

The former pair shares a daughter, Vanessa Antovska. Vanessa is also an actress just like her mother appeared in the movie The Line.

As of 2019, Haydu is possibly single as there is no news of her relationship status and dating life, similarly, her former husband Peter has been living under the radar since their separation.

Haydu’s main source of earning is her acting job, besides, she also earns from advertisements, commercials, and endorsement deals.

Taking about career, she has appeared in theatrical plays Three in the Soup or Mizantrop. Likewise, she also plays at the West Theatre and at the Slovak National Theater.

Well, in TV she was involved in the creation of a successful show What Can Street for around 9 years long. Additionally, she featured in Rose Garden Gardening, The Blockhouse, Throw the Groundhog, Warm Wine, and Guys Don’t Cry.