home Biography Who Is Kiernan Shipka? Get To Know All Things About Her Early Life, Age, Siblings, Personal Life, & Relationship

Who Is Kiernan Shipka? Get To Know All Things About Her Early Life, Age, Siblings, Personal Life, & Relationship 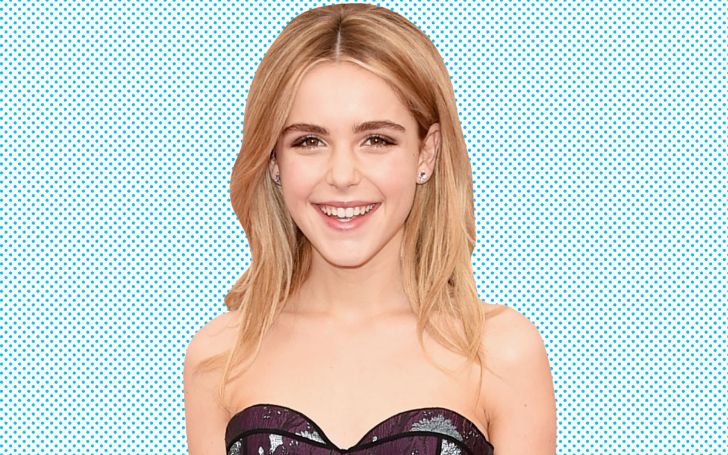 Body and Relation Status of Who Is Kiernan Shipka? Get To Know All Things About Her Early Life, Age, Siblings, Personal Life, & Relationship

Kiernan Shipka, age 19, is an American teen actress who is well known for portraying Sally Draper on the hit AMC  period drama series Mad Men. Also, she starred in the independent teen comedy Fan Girl in 2015. Currently, she is starring on Netflix’s supernatural horror series, Chilling Adventures of Sabrina. Since the age of five, she started taking dancing classes and moved to Los Angeles to pursue her acting career. Currently, the beautiful actress has maintained a net worth in millions, all from her hard efforts and dedication towards her career.

Kiernan Shipka was born on November 10, 1999, in Illinois, U.S.A. As of 2019, she turned into 19 years old and holds Scorpio zodiac which defines her personality as mysterious. She is of American nationality and belongs to mixed (Irish, Italian, German, Scottish) ethnicity.

Born to mother Erin Ann Shipka (née Brennan), and father John Young Shipka, a real estate developer, she was raised by her parents in a friendly environment. Her name Kiernan means 'Son of a lord'.

Since the age of five, Shipka has been taking ballroom dancing classes and to support her acting career, her family relocated to Los Angeles, California, when she was six.

Kiernan Shipka's Personal Life: Is She Dating Someone?

In her personal life, Kiernan Shipka is quite a fun loving person. Similarly, she loves to travel different places, hangout with friends, and often shows interest in trying out variety of cuisine.

Kiernan has a black shepherd named Queen Frankie whom she loves so much. Besides, she also has two other shepherds whom she takes a good care.

Talking about her relationships, well, she is unmarried and is not associated with any kinds of relationships or affairs. She does not seem to be involved in any relationship in the past as well.

Kiernan has posted photos of her with her male co-actors and friends on her Instagram account but has confirmed her relationship with any of them. She has shared her Instagram posts with many of the popular faces including Jason Momoa and Jimmy Kimmel.

As of August 2019, Kiernan Shipka’s net worth is around $3 million (Celebritynetworth). She earns a good amount of money from her career and has maintained such an impressive wealth in her life.

According to Payscale, American actors are paid an average of $20.06 hourly, starting from $9.66 to $100.13 and above. Well, they could make an average of around $50 thousand a year with professionals making up to 171 thousand and over.

Coming to Kiernan, well, she can earn at least an average salary made by American actors i.e. $50 thousand a year. While she might also have received from advertisements and endorsements.

With her appearances in several movies and television shows, she has worked in some of the successful movies as well. Here's a list of the movies that has made good collection at the box office:

At the age of 5, Kiernan made her acting debut on television playing the role of a baby on hospital drama ER. Also, she appeared as a Little Girl in two episodes of TV series “Monk”.

In 2007, she played the role of Molly in the film Dimension. In the same year, she had a recurring in successful TV series Mad Man as Sally Draper in a total of 64 episodes until 2015. For her works in the series, she was able to collect positive responses and reviews from fans and viewers.

Shipka has also appeared in other TV series and films including Lower Learning, A Rag Doll Story, and The Angriest Man in Suburbia. As of 2019, she is playing a lead role of Sabrina Spellman in the supernatural horror, Chilling Adventures of Sabrina.

Her recent film works include When Marnie Was There, Fan Girl, The Blackcoat's Daughter, and The Silence.

Who is Kiernan Shipka?

She is an American actress.

How tall is Kiernan Shipka?

What is her net worth?

As of August 2019, Kiernan Shipka's net worth is estimated to be $3 million (Celebritynetworth).