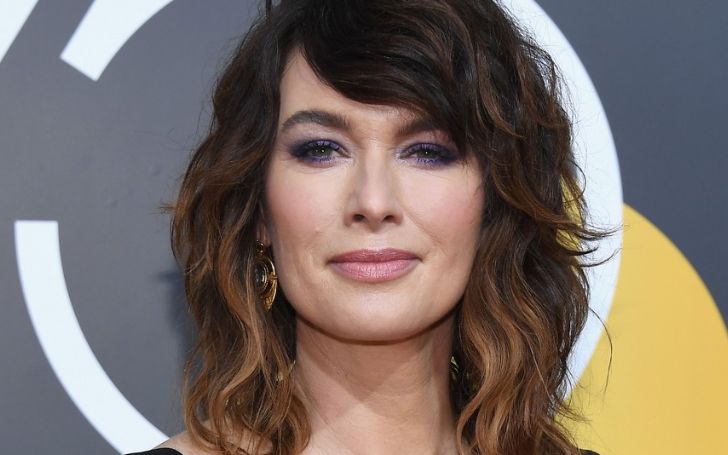 Bermuda-born English actress, Lena Headey has earned massive popularity Queen Cersei Lannister in the HBO’s epic drama TV series, Game of Thrones, for which she has received four nominations for Primetime Emmy Award and a Golden Globe Award. As of 2018, she is the wife Dan Cadan and shares two children. Here’s all you need to know about her.

Lena Headey was born Lena Kathren Headey on October 3, 1973, in Hamilton, Bermuda. She is British who belongs to Caucasian ethnic background. Born to English parents, Sue and John Headey, she has reached the age of 45, as of 2019, and is Libra, which describes her as a warm and balanced person.

Talking about her siblings, well, she has a younger brother named Tim. At the age five, she moved to Somerset along with her family and six years later, to Highburton, near Huddersfield, West Yorkshire.

Headey first experienced acting while studying at Shelley College and was noticed for the first time at the age of 17, when performing in a school production at Royal National Theater. As a result, she was picked for a role in the 1992 movie, Waterland.

Headey briefly became a vegetarian and started to eat meat again rarely. She has also campaigned on behalf of animal rights and spoke out against animal abuse in an advertisement for PETA, an animal welfare group. Also, she supports NOH8, the LGBT rights organization and appeared on a T-shirt designed by them and sold through Represent.com raising funds for the cause.

Heady is fond of tattoos and has inked numerous tattoos on her body. Also, she told Esquire magazine, “I love tattoos. I find it calming.” When she works, her tattoo often needs covering. However, she has stated, “you can usually get away with it by keeping your clothes on.”

Regarding tattoos, she has said, “I always want more. It’s a terrible thing”, she added, “I’ll be outside a tattoo shop and hear the needle and think, ‘I could just get a little one that nobody would see …’ ”

Lena Headey has at least 13 known tattoos. From the open birdcage on her forearm to the lotus blossom, peonies and shallows covering her back and shoulder, she has covered her body in ink. Also, she has tattooed a quote of Pema Chödrön, a Tibetan Buddhist, on her ribs.

Regarding her relationship status, Lena Headey has been married to the director, Dan Cadan since 2018. The couple were childhood friends and also worked together on Dan’s short film, The Devil’s Wedding.

Together, the pair shares a daughter named Teddy born on July 10, 2015. Soon, they got engaged and finally married in 2018.

She currently resides in the Laurel Canyon area of Los Angeles with her husband and children.

Lena Headey’s Relationship In the Past

Prior to her marriage, Headey was in a relationship with the musician, Peter Loughran, which eventually turned to marriage in May 2007.

The pair shared a son, Wylie Loughran, born on March 31, 2010. She stated that she suffered from postnatal depression following her son’s birth.

However, the pair separated in 2011 and Lena filed for divorce in the Los Angeles County Superior Court on July 20, 2012. The divorce was finalized on December 26, 2013. The following year, she was linked to her fellow Game of Thrones co-star Jerome Flynn. Their relationship reportedly ended badly in around March 2014, which resulted in the two being kept apart on set.

Besides, she has been close friends with actress, Piper Perabo since they together starred in the 2005 films The Cave and Imagine Me & You. Also, she is good friends with her fellow co-stars of Game of Thrones, Pedro Pascal and Peter Dinklage. Dinklage was the one to first suggest that she be cast as Cersei Lannister on Game of Thrones.

Lena Headey’s Career And Net Worth

Lena Headey’s career started in the early 90s. Her photograph was taken by a casting agent while performing in a one-off show and was called for an audition. Eventually, she received a supporting role in the 1992 British drama, Waterland. The following year, she had a small role in the critically acclaimed movie, The Remains of the Day.

Similarly, she played Kitty Brydon in Disney’s The Jungle Book in 1994. Also, she appeared as a mousey Victorian lesbian artist in the mystery drama, Possession alongside Gwyneth Paltrow, and Aaron Eckhart, among others.

Headey rose to fame and received much wider recognition when she starred as Angelika with Matt Damon and Heath Ledger in a 2005 adventure movie, The Brothers Grimm. The movie received mixed reviews grossing $105.3 million at the box office.

In 2007, she portrayed Queen Gorgo in Zack Snyder’s epic war film 300, based on the comic series of the same name. The role became one of her best-known roles to date. She starred alongside Gerard Butler, David Wenham, and Dominic West, among others in the movie. However, the film earned mixed reviews making a huge gross of around $456.1 million at the box office.

In the same way, she appeared as Sarah Connor in Fox’s TV spin-off, Terminator: The Sarah Connor Chronicles. The show ran for 31 episodes in two seasons from January 2008-April 2009.

At the starting of April 2011, Lena Headey played queen regent Cersei Lannister on the HBO‘s fantasy TV series, Game of Thrones based on George R. R. Martin’s A Song of Ice and Fire series of novels.

She reprised her role as Queen Gorgo in the movie, 300: Rise of an Empire, following the success of 300. However, it was also a major success grossing $337 million at the box office. Her most recent movies include Thumper, Pride and Prejudice and Zombies, Unity, and Zipper. Likewise, her recent TV appearances include Rise of the Teenage Mutant Ninja Turtles, Trollhunters, Danger Mouse, and Uncle Grandpa.

Lena Headey’s net worth is $9 million at present. She earned a huge sum of money from her career. Her earning per episode was $1.1 million while working in the series, Game of Thrones.

She made headlines in April 2013, announcing that she was nearly bankrupt after a lengthy and bitter divorce battle. During that time, she reportedly had $5 in her bank, despite being one of the most popular stars earning $150 thousand per episode.