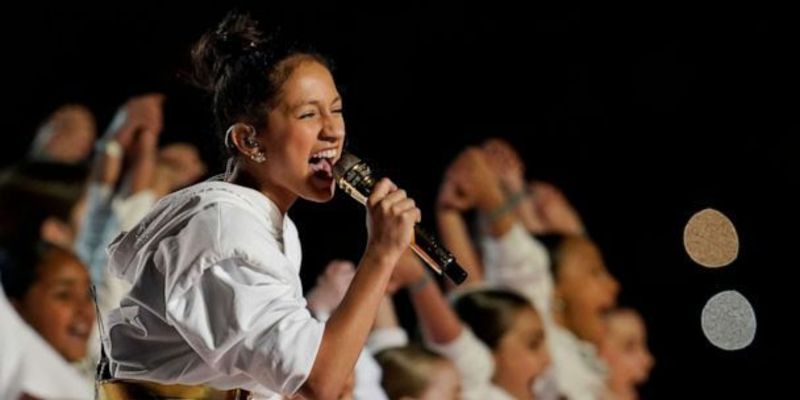 Jennifer Lopez and Marc Anthony, who married in 2004, caused quite a frenzy among media with pregnancy rumors in 2007.

A year after the confirmation, Lopez gave birth to twins, a daughter Emme Maribel Muñiz and a son Maximilian David Muñiz.

Both of the children have enjoyed the attention of media with appearances on their parent's social media. However, it seems Emme and Maximilian no longer need the shadow of their parents to be in the spotlight.

At just the age of 11, Emme has already proved the world that she is not just a celebrity child. Recently, she stole the spotlight with her spectacular performance on the Super Bowl LIV halftime show. While it certainly was mother-daughter duo, the 11-year old surely had all eyes on her with such high-energetic performance.

7. Has a Lovely Nickname

Jennifer's daughter's name is often used as a nickname. According to Bounty, the name Emme is of German origin and a diminutive of the name Emmeline.

While her name can itself serve as a nickname, Lopez has given her a sweet nickname.

In an Instagram post about Super Bowl rehearsal, Lopez called her daughter 'Lulu' and stated how she loved it when her daughter shows up in her rehearsals.

Interestingly, Muñiz joined her mother in the stage of Super Bowl, so perhaps Lulu's visit was not so casual after all.

Jennifer Lopez twins made their first appearance on People Magazine on March 11, 2008. Reportedly, Lopez and Anthony received 6 million dollars for the photoshoot from the magazine.

At that time, the picture of the twins became the most expensive celebrity picture to date. However, Angelina Jolie and Brad Pitt's children took the position in July of the same year.

In 2018, Lopez recorded a soundtrack for the movie Second Act called "Limitless." The video for the song was released on December 20, 2018.

What's interesting is that the song featured Emme as a younger version of her mother. However, both were never shown together in the video.

In an interview with Good Morning America, J Lo expressed the joy of working together with her daughter. Lopez added, "Emme is my favorite thing about the video. She is the little girl inside of all of us that are always fighting."

4. Emme has Penned a Book

At just the age of 10, J Lo daughter wrote a children book titled Lord Help Me!. The Dinero hitmaker posted a video in her Instagram where she shared about the business meeting Emma was part of as the author of the book.

Moreover, famous Spanish illustrator Ana Martin-Larranaga will depict the pictures that will accompany the book.

Lopez shared a video of her weekend titled "Ain't No Weekend Like a JLo Weekend" in May of 2019.

Emme made an appearance in the mid-time of the video. The 11-year-old sang Alicia Keys's "If I Ain't Got You." The amazing performance of Emma grabbed the attention of millions, and she soon went viral on the internet as people could not stop admiring.

2. Monez Love for Singing Started at an Early Age

In an interview with Entertainment Weekly, Jennifer Lopez reminisced the childhood years of her daughter. She exclaimed, "It is natural. Emme could always sing," She further added, "I remember when she was in the crib, she used to be humming, like, really humming to herself."

Jennifer Lopez and Shakira graced the stage of the Super Bowl in 2020. The most interesting of all in the show was Jennifer Lopez's daughter's performance that left everyone amazed.

Emma carried herself like a professional singer in front of almost 20,000 fans. However, this isn't her first performance as she has previously joined her mother tour and garnered admiration. Lopez says Emma, "has it in her blood" to become a notable singer, and we surely couldn't agree more.