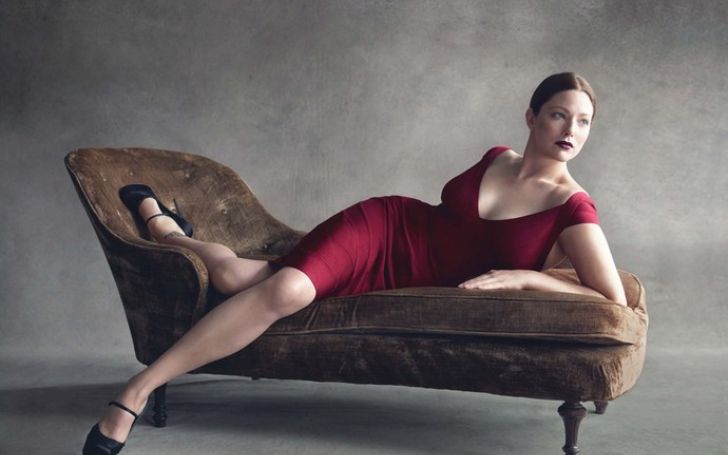 Kate Dillion Levin is an American model, actress, and social media star, well known for her career as a plus-size model in U.S. Moreover, she appeared in fashion magazines, cosmetics, and designer campaigns. In fact, she was the first plus-size model to appear in U.S. Vogue and in a Gucci campaign. Similarly, she has involved with many non-profit organizations and is an advocate for eating disorder awareness and treatment, sustainability, global poverty reduction, and social justice.

Kate Dillon was born on March 2, 1974, in Washington, D.C, United States. According to her date of birth, she turned 44 years old, as of 2018. Likewise, her star sign is Pisces, which describes her as a generous and emotional personality. Kate holds American nationality and belongs to the white ethnic background. Similarly, she is the daughter of father Tom Dillon and mother Carol Dillon. She has a brother named Dan. She moved to San Diego with her family at the age of 10. Due to her size, she was teased by peers in adolescence. She was influenced to her lose her weight from a documentary that she watched at the age of 12 and triggered an eating disorder, which lasted seven years.

Moving towards Levine’s education, she studied at the University of St. Thomas in Houston, Texas and graduated with a bachelor’s degree in political science and international studies. Later, she enrolled in Harvard University’s John F.Kennedy School of Government and received a Master’s degree in Public Administration and International Development. Also, she graduated from La Jolla Country Day School and was accepted in the University of California, Berkeley. Finally she decided to pursue her modeling career after completing her graduation.

In addition, she co-authored a prize-winning dissertation and received a Dean’s award for teaching statistics.

The couple divorced on the 5th of August 2014, however, the reason behind the divorce is unknown. Besides, there is no information about her extra affairs and boyfriend. Also, she has updated her recent relationship status to the public.

Kate Dillon’s modelling career started at the age of 16; she was discovered by a San Diego photographer while sitting in a cafe. While finishinf high school, she worked as a model in Los Angeles. In 1991, she took part in Elite Look of the Year currently (Elite Model Look) contest, finishing third in the contest; also, she won a $75 thousand contract with Elite Model Management.

After working with photographers suuch as Richard Avedon and Peter Lindbergh, she appeared in campaigns for many companies including Bergdorf Goodmad, Chanel, and L’Oreal and was on the cover of the November 1992 edition of Mademoiselle. Also, she appeared in editorials for different magazines like Elle, Marie Claire, and French Glamour and at the end of the same year, she became Lane Bryant Venezia Jeans V Girl.

Although Dillion was gaining fame in the modeling world, she left modeling in 1993 but came back as a plus-size model in 1996 and became the face of Elizabeth by Liz Claiborne.

Likewise, Kate Dillon featured in Glamour Magazine along with plus-size models Amy Lemons, Anansa Sims, Ashley Graham, Crystal Renn, Jennie Runk and Lizzie Miller in a nude photo referencing Herb Ritts’ famous photo of 90’s supermodels in 2009. In April 2010, she appeared in US Vogue for a second time in the April 2010 Shape Issue.

In 2010, Kate Dillon became the spokesmodel for Suki, an eco-friendly cosmetics line. In 2011, Dillon appeared on the cover of Organic Your Life along with her son Lucas.

Similarly, Kate Dillon’s net worth is expected to be around $1 million at present. Generally, an average salary of plus-size models is $32,786, so she might be receiving a good sum of money from her career as a plus-size model.