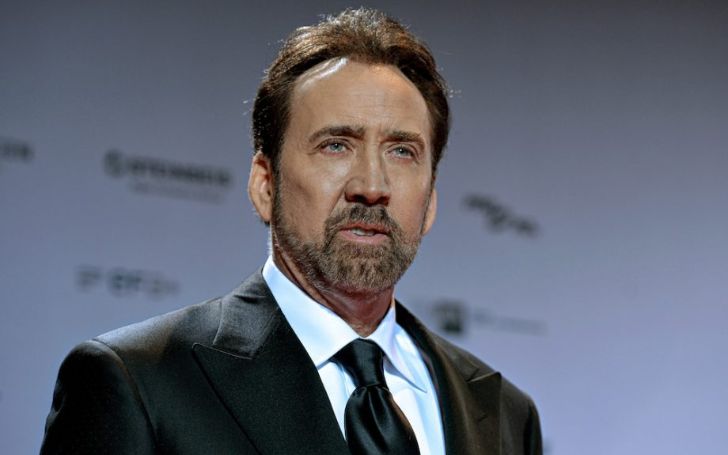 Academy Award winning-actor, Nicolas Kim Coppola, aka Nicolas Cage has grabbed the public attention starring in the variety of films. He is best known for his Ghost Rider in a supernatural superhero based movie of the same name. His most recent work was in a 2018 superhero film, Spider-Man: Into the Spider-Verse.

Born Nicolas Kim Coppola on January 7, 1964, in Long Beach, California, U.S., he is courageous and practical as per his birth sign, Capricorn.

Son of August Coppola and Joy Vogelsang, Cage grew up in a Catholic family. His father was a professor of literature, of Italian descent and his mother was a dancer and choreographer of German and Polish descent. He is the grandson of composer Carmine Coppola and actress Italia Pennino.

Similarly, Cage has two brothers; New York radio personality Marc “The Cope” Coppola and director Christopher Coppola. He attended Beverly Hills High School, from where many of the former pupils became entertainers. From an early age, he was interested in acting and also attended UCLA School of Theater, Film, and Television. He experienced his first non-cinematic acting in a school production  Golden Boy.

When it comes to tattoos, Nicolas Cage has inked many tattoos on his body. Being a huge comic book collector, he has a tattoo of antihero Ghost Rider. Similarly, he has got a large back tattoo of a lizard in a top hat and cane to “claim my own body,” adding, “other cultures have initiations into manhood and that’s what the tattoo was for me,” he told reporters for the Philadelphia Inquirer in 1994.

Talking about Nicolas Cage’s relationship, well he has been married three times and had a long dating history. He started dating actress Christina Fulton in 1988. The couple shared a son Weston Coppola Cage, born on December 26, 1990. His son Weston was the lead singer of the black metal band Eyes of Noctum. Weston has been married three times and shares two sons; Lucian Augustus Coppola (born 2014) and Sorin Cage (born 2016) with his second wife Danielle.

Cage’s first marriage was with actress Patricia Arquette in April 1995. They lived as a husband and wife for a few years and separated, finalizing their divorce in 2001.

Likewise, he was married for the second time to singer and songwriter Lisa Marie Presley, daughter of “King of Rock and Roll,” Elvis Presley. The couple wedded on August 10, 2002, and filed for divorce on November 25, 2002. Their divorce was finalized on May 16, 2004; their divorce proceeding was longer than the marriage.

In the same way, Cage wedded for the third time to Alice Kim, a former waitress who worked at the restaurant named Kabuki, in Los Angeles. The pair together has a son named Kal-El, (after Superman’s birth name) born on October 3, 2005. Their wedding ceremony was held at a private land in Northern California on July 30, 2004. They separated in 2016.

Additionally, the actor has been linked with other actresses including Elizabeth Daily, Brooke Shields, Ami Dolenz, Maria Conchita Alonso, and Kristen Zang.

Nicolas Cage’s Career And Net Worth

Nicolas Cage debuted his career with a minor role in an American coming-of-age comedy, Fast Times at Ridgemont High, opposite Judge Reinhold and Sean Penn. Similarly, he has received nominations for an Academy Award twice winning once for his performance as a suicidal alcoholic in a 1995 American romantic tragedy movie, Leaving Las Vegas. Likewise, he made his directorial debut with 2002’s crime-drama film, Sonny.

His first successful movie was National Treasure, which grossed $347.5 million at the box office. He starred alongside Jon Voight, Harvey Keitel, Diane Kruger, and Sean Bean, among others in the movie.

Cage’s breakthrough role came in Ghost Rider, a 2007 supernatural superhero movie based on the Marvel Comics character of the same name.

He starred alongside Eva Mendes, Wes Bentley, and Sam Elliott, among others in the movie. It became one of his commercially successful movies grossing $228.7 million at the box office. He reprised his role in Ghost Rider’s sequel,  Ghost Rider: Spirit of Vengeance in 2012.

Similarly, his most recent work was in a 2018 Marvel Comics-based computer-animated superhero film, Spider-Man: Into the Spider-Verse, where he voiced Peter Parker/Spider-Man Noir.

Nicolas Cage’s net worth is $25 million at present. He has earned a massive amount of salary from his career. His fee per movie in the early 2000s was $20 million. In fact, he was once considered one of Hollywood’s highest-paid actors by Forbes, earning $40 million in the year 2009.

Over the years, the actor has made so many purchases that have dropped his net worth quickly. His net worth was $150 million in the past.

In 2012, he admitted that he owed tax of an impressive $14 million, as he wasn’t always paying the proper amount of taxes and as a reult, was caught by IRS.

Nicolas Cage owned a house in Malibu, which he sold in 2005, for $10 million. Similarly, he purchased a property on Paradise Island, the Bahamas in 2004. He sold the medieval castle Schloss Neidstein in the Oberpfalz region in Germany, in 2009, for $2.5 million. He bought the property in 2006.

Similarly, he spent $12.3 millio on two European castles, $3 million on a private island, and $3.4 million on a haunted house in New Orleans. Likewise, he made an incredible purchase of a New Beach estate for $25 million that paled all those purchases.

In the same way, his purchase of a property in Rhode Island worth $16 million and a pad in Las Vegas worth $8.5 million kept hid property taxes ballooning.

Similarly, Cage is active on charitable activities as well and has called one of the most generous stars in Hollywood. He donated $2 million to Amnesty International. Likewise, he also donated $1 million to the victims of Hurricane Katrina.