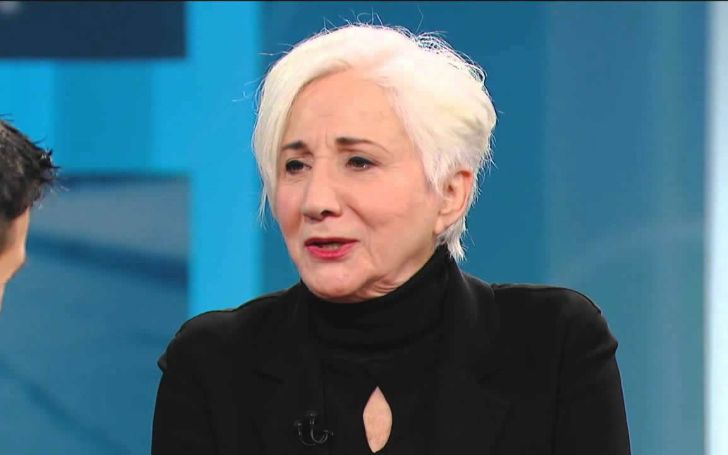 Olympia Dukakis is a legendary Greek American stage and film actress. She is mostly remembered for her Off-Broadway performance in Bertolt Brecht’s Man Equals Man for which she received an Obie Award for Best Actress in 1963. Olympia is also a popular movie actress who has worked in films like John and Mary, Steel Magnolias, The Cemetery Club, The Event, and Cloudburst. She, however, is best known for her outstanding performance in Moonstruck. She was nominated for an Academy Award, a BAFTA, and a Golden Globe for her role Rose Castorini in the movie.

Olympia Dukakis was born on June 20, 1931, in Lowell, Massachusetts, under the birth sign Gemini. She holds an American nationality and belongs to the mixed ethnicity of Anatolia and Peloponnese.

Olympia is a daughter of Alexandra (néeChristos) and Constantine S. Dukakis. She spent early days in Lowell, along with her brother Apollo. Olympia attended Arlington High School in Arlington, Massachusetts.

Later, after her graduation from there, she attended and graduated from Boston University.

Olympia Dukakis was married to Louis Zorich who was also an American actor best known for his role on the NBC series Mad About You. The couple tied the knot in 1962 and they shared each and every moments of their life together blissfully until death apart them. Zorich died at the age of 93 on January 30, 2018, in Manhattan. The duo was blessed with three children, one daughter, and two sons.

Olympia Dukakis has an estimated net worth of $6 million. As a successful actress, she was able to collect a good amount of money as she has worked in the film industry for over 30 years.

She made her Broadway debut in “The Aspern Papers” at the age of 30. Later in 1999, she was featured in a one-woman play titled “Rose“. In 2008, she made her appearance in “The Milk Train Doesn’t Stop Here Anymore” as well as in “Another Side of the Island“.

Some of her theatre actings include Vigil, The Tempest, The Cherry Orchard, The Rose Tattoo, and Mother Courage and Her Children.

Olympia began her television acting by playing her role as Katherine in 1991, television series “Lucky Day“.

Until now she has appeared on numerous television series including The General Motors Playwrights Theater, Fire in the Dark, The Neighborhood, One of the Boys, Bored to Death, Forgive Me, Mike &Molly, Big Driver and Tales of the City.

Till today she has portrayed her role in many movies including Death Wish, Walls of Glass, The Event, Better Living, Milk & Money, I Lover Trouble, Broken Links and Change in the Air.