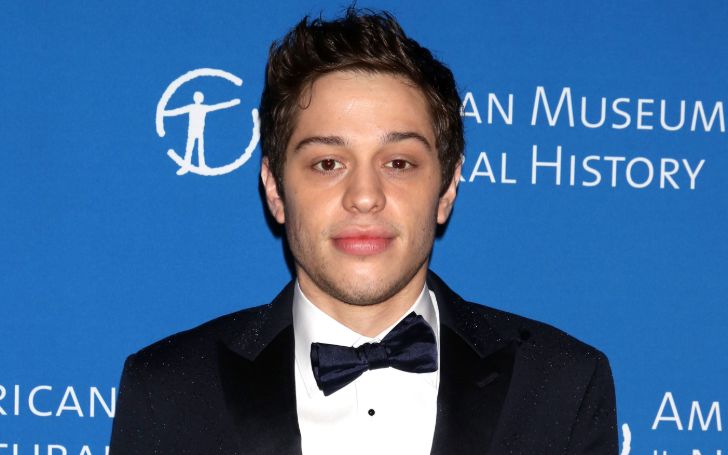 Pete Davidson is the most popular actor who is well-known for playing different roles on Saturday Night Live as a recurring cast member. Moreover, he too grabs limelight due to his relationship with the talented and successful singer, Ariana Grande.

Pete Davidson was born in Staten Island, New York City, New York, the USA in 1993, November 16. He has reached the age of 26 as of 2019 and was born under Scorpio birth sign which describes him as passionate.

Pete Davidson loves tattoos and has inked some in his body. He has tattooed Hilary Clinton and had even got the tattoo that says Reserved for CD. On his forearm, he also tattooed a self-portrait his ex-girlfriend, Cazzie drawing which she drew at the age of 5. Similarly, he also got matching tattoos with his former fiancee, Ariana Grande.

What is the current relationship status of Pete Davidson? Who is he dating?

The current relationship status of Pete Davidson is not yet confirmed. But these days, he is rumored dating actress, Kate Beckinsale. The couple was caught walking together and holding hands outside the Los Angeles comedy venue Largo at the Coronet. Pete was performing in the show walked in waving his hands to his fans.

Later, Kate dropped off in the back alley of the venue and straight went to the backstage. She rushed inside along with her hand over her face. The pair left the show together and was holding their hand tight and waiting for their car. They were spotted having fun and giggling in the back of the care. However, the rumors are yet to be confirmed.

Pete Davidson started dating the actress, Carly Aquilino after joining Saturday Night Live in 2014. The former couple used to support each other on Twitter but did not get to see each other much due to their work. Unfortunately, in 2015, May they separated from each other. Furthermore, he also was in a romantic relationship with Cazzie David. They met for the first time on the sets of SNL in 2015 and began uploading intimate pictures in 2016 on Instagram. But this relationship also ended in the year 2018, May.

His most notable relationship was with his ex-girlfriend, Ariana Grande. She is most popular as a singer in Hollywood. The couple started dating each other in 2018, May. After dating for a month the pair got engaged in June 2018. Additionally, the lovers were happily living their life together but the relationship could not run for a long time. The pair called off their engagement in 2018, October and parted their ways.

Pete Davidson is successful in his career as an actress as well as a comedian. He has worked in the movies and TV shows like School Dance, Set It Up, What Men Want, Guy Code, The Jim Gaffigan Show, Saturday Night Live and much more. Additionally, he also starred along with the stars like Nick Cannon, Amber Rose, Tiffany Haddish, Zoey Deutch, Tracy Mogan, April Rose, and many others.

The net worth of Pete Davidson is $2 million. Through his career, she earns millions of dollars and might receive a salary in thousands of dollars. He surely lives a luxurious lifestyle and owns expensive assets which cost millions of assets.

Well, some source also claims that he laid out a cool ring of $100k for Grande’s engagement ring. Davidson also enjoyed a net worth of $50 million of his ex-girlfriend Ariana before the separation.  He will probably add more dollars in his bank balance and net worth in the coming days.