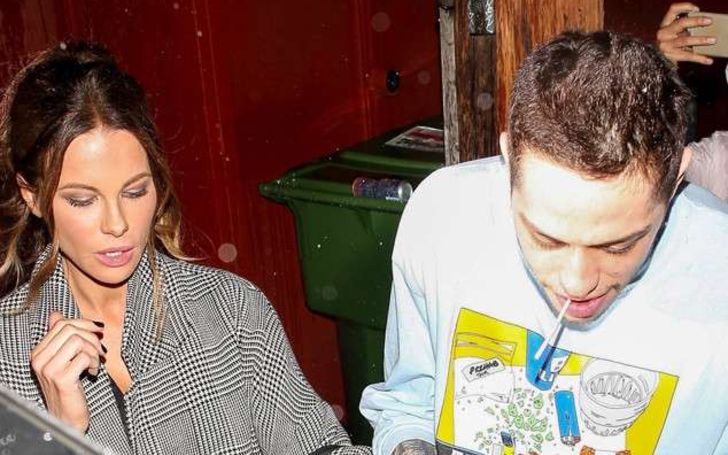 The 45 years’ old British actress Kate Beckinsale and the 25 years’ old American actor Pete Davidson are still sparking their relationship rumors after the pair appeared together outside the LA comedy venue on Friday, February 1, 2019.

The pair looked fabulous as they held hands when the pair arrived at Largo at the Coronet, where Pete performed a show.

The actress wore a black and white checked coat while the Saturday Night Live star wore casual sweatshirt and trousers.

Pete Davidson and Kate Beckinsale arrived at the show separately but as the show ended the pair rushed out together into an awaiting car.

An eyewitness told E! News, Pete and his new love interest left together through the back door. Pete held Kate’s hand tightly and led her to the car.

They (Pete Davidson and Kate Beckinsale) were giggling together in the back of the car and having fun.

The two were driven to a hotel. Inside the lobby, they sat on a couch together. Pete had his arm around Kate and she was leaning into his neck. They definitely looked like a couple.

Beckinsale spent some time with Pete and think he’s very funny and charming. It’s not anything intense.

This sighting comes a couple of weeks after the pair was spotted looking cozy at Netflix’s 2019 Golden Globes after-party.

Before this, Pete Davidson was in an engaged affair with his former fiance, Ariana Grande. Likewise, for Kate, she was dating her boyfriend Jack Whitehall before her closeness with Pete.