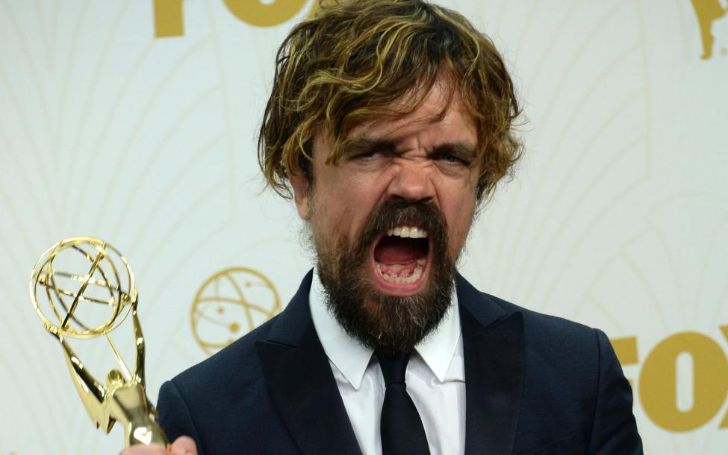 Golden Globe-winning actor, Peter Dinklage is best recognized for his unique acting skills. As an actor and producer, he has successfully won the hearts of many audiences and is best known for his portrayal of Tyrion Lannister on the epic drama series, Game of Thrones. He has grabbed many accolades in his career. He is a married man and shares a daughter with his wife.

Born Peter Hayden Dinklage on June 11, 1969, in Morristown, New Jersey, he is the son of John Carl Dinklage and Diane Dinklage. Similarly, he is Gemini which describes him as an impulsive and energetic person. People with this zodiac sign are enthusiastic about everything they do and bring a ton of energy wherever they enter.

Dinklage was born with achondroplasia, a common form of dwarfism. He grew up with his parents and older brother, Jonathan in Brookside, New Jersey. He was the only dwarf born in his family. As of 2019, he has reached the age of 49.

Likewise, his father was an insurance salesman, and his mother was a music teacher in elementary school. In his childhood days, Dinklage and his brother performed puppet musicals for people in their neighborhood.

Dinklage received his first theatrical success in a fifth-grade production of a British children’s book, The Velveteen Rabbit, where he played the lead and was delighted by the response of the audience to the show.

Talking about his education, he attended Delbarton School, a Catholic preparatory boys school. There, he developed his acting skills. He received inspiration for acting from the play True West, which was written by American playwright, Sam Shepard.

Similarly, he studied for a drama degree at Bennington College. While at Bennington, he appeared in numerous productions before his graduation in 1991. Following his graduation, he moved to New York City with his friend, Ian Bell to build a theater company. He worked at a data processing company for six years before starting his career in acting.

Peter Dinklage did not have a long dating history. Well, he is not involved in any kind of relationship and affairs in the past.

Who Is Peter Dinklage’s Wife?

Dinklage is married to theater director, Erica Schmidt in 2005. The couple started dating in 2004 and got engaged at the end of the year. They had a private wedding ceremony on April 16, 2005, in the presence of limited guests and close relatives.

The pair shares a daughter named Zelig Dinklage, born in 2011. He currently resides in New Jersey with his beautiful wife and daughter.

Dinklage has not been any relationships or affairs in the past. Also, he has not publicly dated anyone in his past days.

Peter Dinklage is a struggling actor who has received huge success in the past few years through his hard work and dedication towards work. He came to limelight after he portrayed Tyrion Lannister in an epic fantasy TV series, Game of Thrones. Here’s a quick look at his story of success from his struggling days.

Dinklage struggled a lot in his early days, to work as an actor. He worked in Off-Bradway productions as well as a variety of other jobs to support himself. In fact, he refused to accept parts that typecast him because of his height.

He made his first big-screen role portraying Tito in an independent comedy film, Living in Oblivion. His breakthrough role came in the 2003 movie, The Station Agent, where he portrayed Finbar McBride.

Similarly, he has worked in the movies such as Find Me Guilty, Death At Funeral, Underdog, and The Chronicles of Narnia: Prince Caspian.

Dinklage received his mainstream success after he portrayed Tyrion Lannister in HBO’s fantasy drama Game of Thrones. He has been working in the series since 2011 and has received widespread praise for his performance. He even faked his own death on the series to mess with people. While promoting his film, I Think We’re Alone Now on Jimmy Kimmel Live, he revealed that he enjoys staging death and waiting for the unsuspecting crew members to find his body.

“I like to pretend I’m dead. It’s always fun,” Dinklage said nonchalantly. “Just my legs sprawled out in the trailer. You’ve got to get really smushed into the floor in a very awkward position … I’ll wait hours. We have a lot of time on set.”

Dinklage’s recent film works include X-Men: Days of Future Past, The Angry Birds Movie, Three Billboards Outside Ebbing Missouri, and Avengers: Infinity War. In the same way, he has worked on the TV shows like Saturday Night Live, The David S. Pumpkins Animated Halloween Special, and My Dinner with Hervé.

He will continue playing the character of Tyrion Lannister in the eighth season of Game of Thrones premiering on April 14, 2019.

Here’s a short video regarding the facts of Peter Dinklage:

What is the Net Worth of Peter Dinklage at present?

Peter Dinklage’s net worth is $ 15 million at present. As an established actor, he has worked in commercially hit movies including The Station Agent, Elf, The Chronicles of Narnia: Prince Caspian, and X-Men: Days of Future Past. Similarly, his portrayal on the series Game of Thrones became one of his best roles to date, winning him many accolades.

How much does Peter Dinklage make per episode?

Well, talking about Dinklage’s salary, he reportedly earns in millions from his successful acting career. Like Lena Headey, he makes a whopping $1.1 million per episode from Game of Thrones making him one of the highest paid actors of the show. Likewise, he also made a good sum of money working in the successfully hit movies that include:

Awards And Achievements: Does Peter Dinklage has an Oscar?

Looking at his acting talent and skills, he surely deserves an Oscar, but has not yet the earned the honor. In his career, he has received 61 nominations and won 14 awards.

In 2017, he won Critics’ Choice Awards for Best Acting Ensemble. Similarly, he has earned many awards including Empire Awards, Golden Globe Awards, and Primetime Emmy Awards, most of which, he earned from Game of Thrones.