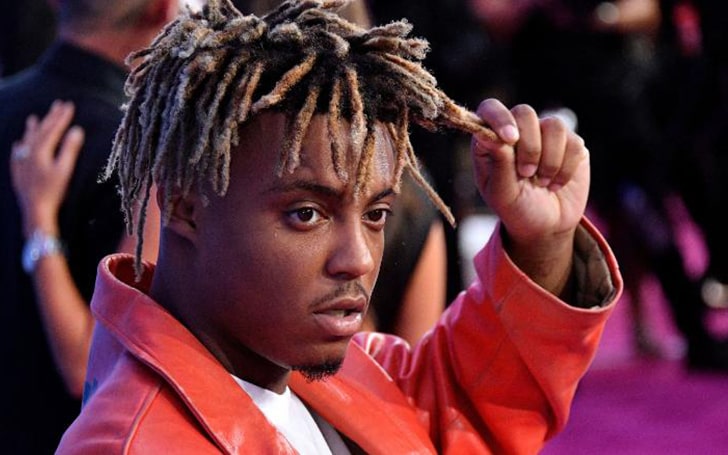 Anthony Guglielmi, a Chicago Police spokesman, told of the death of 21-year-old rapper:

This is being classified currently as a death investigation. There are no initial signs of foul play and we are awaiting results from the medical examiner on the cause and manner of death.

Juice was returning to his home from Los Angeles on a private flight, and he was in a private hangar of the airport when the rapper collapsed. When the law enforcement and paramedics arrived at the scene, they found Juice bleeding from the mouth.

Juice regained consciousness before he was rushed to a local hospital where he was pronounced dead by 3:14 a.m.(local).

Juice, born Jarad Anthony Higgins, started working as a music artist during the first year of high school. He released his first track, Forever, on SoundCloud in 2015 and released two studio albums.

Here's what you need to know about the rapper.

7. Talked About His Struggle With Substance Abuse in His Rap

Late rapper Juice WRLD had extensively talked about his struggle with drug and substance abuse in his raps. In his music, Juice talked about taking banned drugs like Percocet, codeine infused cough syrup, and more.

In his 2018 mixtape with Future, WRLD on Drugs, the rapper hinted his addiction with Percocet or "Percs." Moreover, in his single, Empty off Death Race for Love, he rapped about his problem solving with Styrofoam, a reference to sipping cough syrup.

6. Juice Was Working on His Third Studio Album

Juice WRLD was on the final course of the release of his third studio album at the time of his death. In an interview with XXL in October 2019, Juice revealed his album would be released on his birthday, December 2, however, the album was yet to be released until his death on 8th Dec.

At that time, Juice's friend and engineer, Max Lord described the album would be focusing on Juice's evolution. Lord added his first album told the story of Juice's bad relationship and heartbreak while his second album was about going through finding love again with his girlfriend, Ally.

5. It Took Juice Only 15 Minutes To Make "Lucid Dreams"

Juice WRLD's fame skyrocketed following the release of his two debut singles, All Girls Are the Same and Lucid Dreams-the latter becoming one of the most popular numbers of 2018, picking an MTV Video Music Awards nomination. The song peaked at #2 on Billboard's Hot 100.

Talking to Vulture in 2018, WRLD told he had created the song in just 15 minutes. The catchy melody to a sample of Sting's 1993 song, Shape of My Heart, earned Juice millions of fan followings. Meanwhile, singer Sting publicly stated that Lucid Dreams was a beautiful interpretation of his 1993 single.

4. His Nickname Was Inspired By Tupac

Juice said, the second part of his name, WRLD is because it "represents taking over the world."

3. Juice's Parents Divorced When He Was Three

His parents got divorced when Juice was only three years old, and since then, he was raised by his single mother. Some online tabloids report his father left his mother, him, and his brother abruptly.

Juice's mother was religious, and he had a strict upbringing as his mother restricted him from listening to hip hop though she allowed him to listen to rock and pop music.

2. Juice WRLD Was in a Relation With Girlfriend Ally

Rapper Juice was in a healthy relationship with girlfriend Ally Lotti. Lotti is an Instagram influencer with over 200k followers. Juice revealed he was living with a girlfriend named Alexia in Los Angeles during an interview with The New York Times. At the time, he told NYC that he met his girlfriend just as he was establishing success.

Previously, Juice publicly apologized to his girlfriend when he decided to quit codeine. Later he said he had quit taking drugs for which he credited his girlfriend.

Before he started dating Lotti, Juice was in a relationship with a singer, famously known as Starfire. He split from her during his last year of high school. Juice later wrote the song "Lucid Dreams" about his heartbreak following the breakup with Starfire.

1. Juice Had A Net Worth Of $4 Million at the Time of His Death

According to Celebrity Net Worth, rapper Juice WRLD had a net worth of $4 million at the time of his death. His career as a rapper was the primary source of his income. Juice had signed a $3 million record deal with Interscope Records in early 2018.

Juice national and international musical tours also earned a significant sum of money for the rapper. Most notably, Juice collaborated with hip hop queen Nicki Minaj on The Nicki Wrld Tour. They had a total of seven shows on the tour, from which they collected a whopping $3.99 million.