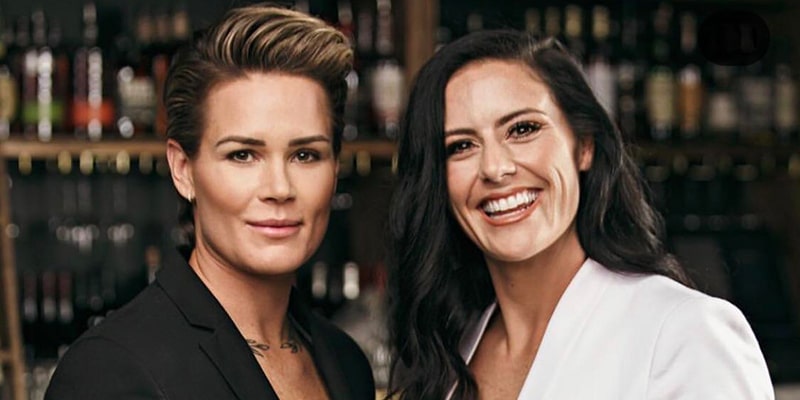 Ali Krieger and Ashlyn Harris, two stars of the American soccer team, have got married. Harris, 34, and Krieger, 35, tied the knot in a beautiful wedding at Vizcaya Museum and Gardens in Miami, Florida, in attendance of their family and friends. Singer Kina Grannis performed as Krieger and Harris walked down the aisle on Saturday, 28th December.

Talking to People ahead of their wedding, Krieger said the couple fell in love with the venue right away. She told,

It was this kind of Mediterranean castle-like vibe right on the water, this European-type vibe that we were going for. Right when we walked in we were like, 'Oh my God. We love this and everyone else was going to love this and this is just ... This is it.

Krieger opted for a gown by Pronovias while Harris wore a custom suit by Thom Browne on their big day. The pair exchanged their vows after over nine years together. Ahead of their wedding, Harris and Krieger both took to their Instagram sharing their photo from their wedding. In the caption, both of them showed their eagerness to be married. Krieger wrote "I can't wait to marry you!" while Harris wrote "It’s time baby... I’ve been waiting 10 years for this moment" in the caption.

So, how the teammates turned into soulmates? We'll find every detail about the couple below in the seven facts.

Soccer star Ali Krieger and Ashlyn Harris met for the first when they were called up for the US national team in 2010. According to their interview with People, the couple hit it off in their early days and became good friends soon. Harris said, "We became close friends, and we just hung out, we clicked, and we had so much in common."

6. Started Flaunting Their Love Publicly in 2015

After getting close within weeks, Krieger and Harris began spending lots of time together, but they kept their relationship away from the media for years. They were frequently appeared together in team photos and were spotted hanging out together. But, the pair always tried to keep their relationship low key until 2015, when they both started sharing their photos on each other's social media.

On New Year 2015, Harris shared a photo of the couple writing "Happy New Year" in the caption while Krieger shared their photo, which seemed from their New Year bash.

The couple has been open about their relationship ever since.

5. Kept Their Engagement Secret For Over Six Months

It just was a really good time. I was really surprised because it just seemed like another weekend getaway for us. I wasn't really thinking about it at all!

Virginia-born Ali Krieger attended Forest Park High School in Woodbridge, Virginia, after studying for one year at Hylton High School. At Forest Park, she was captain for three years, and she led the team to their first undefeated regular season.

After high school, Krieger played for Washington Freedom and Northern Virginia Majestics before she signed a two-year contract with FFC Frankfurt in teh Frauen-Bundesliga. She helped the team win Bundesliga title, Frauen DFB-Pokal Champions, and UEFA Cup Champions in her first season with the club. Back then, she became the first American soccer player to win the UEFA women's cup.

3. Harris Was Passionate about Surfing Before She Became a Soccer Player

Ashlyn Harris talked about her passion for surfing during a Q&A with the USWNT in 2004. At the time, she revealed how her love for surfing almost led her to pursue a professional career. She said,

Satellite Beach and Cocoa Beach, are chill. When there are waves there, they break really good because of the reef.

2. They Both Play For Orlando Pride

Krieger and Harris played for separate clubs before they joined Orlando Pride in 2016. Pride signed Harris on October 20, 2015, and months later, they signed Krieger on November 2, 2016. Since then, the lovebirds have been playing for the same club.

In 2017, Pride ended 3rd in the regular season and qualified for the playoffs first time. They lost 4-1 to Portland in the semifinal. Krieger had started every match of the season, however, Harris only played in 14 games as she picked up a quad injury that forced her to take eight weeks long rest.

1. Krieger and Harris Both Are Two Times World Cup Champions

Newlyweds; Ali Krieger and Ashlyn Harris both are world cup winners. They became world cup champions for the first time in Canada in 2015. They again became the world champion in 2019.

The United States soccer team beat the Netherlands 2-0 in the final that was played in France on 7th July 2019. Krieger and Harris, however, weren't picked in the opening eleven for the final.