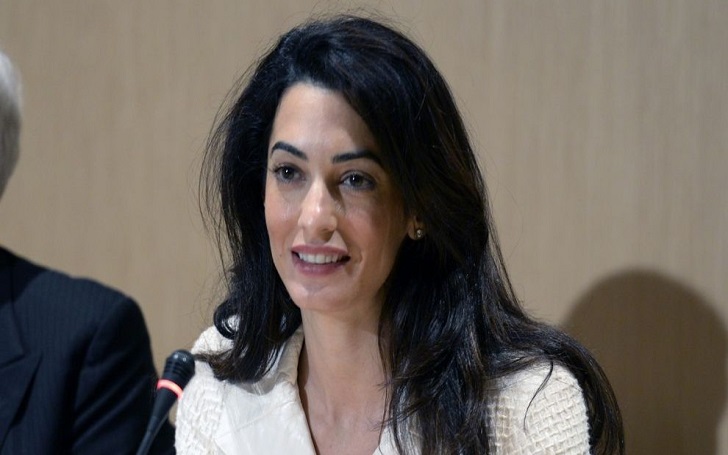 She is the ambassador of media freedom appointed by the British Foreign and Commonwealth Office in 2019.

Amal served as an adviser to the former UN Secretary-General Kofi Anan and the King of Bahrain and was involved with Bahrain Independent Commission of Inquiry led by Professor M. Cherif Bassiouni.

The Lebanese-British barrister has fought many high profile cases like that of Julian Assange, founder of Wikileaks. She also represented former intelligence chief and brother in law of revolutionary Colonel Muammar Gaddafi, Abdullah Senussi.

In a statement he said,

the worst kind of tabloid. One that makes up its facts to the detriment of its readers

The couple received their marriage licenses on 7th August 2014 at Royal Borough of Kensington and Chelsea in London.

Amal Alamuddin and George Clooney married on 7th August 2014 in Venice and were wed by Clooney's friend Walter Veltroni, the previous mayor of Rome.

5. Amal Is A Highly Educated Individual

She graduated from St. Hugh's with a bachelor's degree in Jurisprudence in 2001 after which she entered the New York University School of Law for Master of Laws (LLM). During her time in the university, she was a clerk at the International Court of Justice.

Amal Alamuddin Clooney is the recipient of several honors and awards. She received an Exhibition (scholarship) and the Shrigley Award from St. Hugh's College.

While in NYU she was awarded Jack J. Katz Memorial Award for her excellence in entertainment law.

In 2014 British Fashion Awards, Amal was shortlisted for Best British Style along with big names like David Beckham, Emma Watson, Keira Knightly, and Kate Moss. The following year she was chosen as  Barbara Walters' Most Fascinating Person.

3. She Is A Philanthropist

Amal and her husband founded the Clooney Foundation in 2016 which aims to provide justice in the courtroom, classrooms, and communities around the globe.

The couple promised to donate $500,000 to March for Our Lives (MOFL) after the shooting at Stoneman Douglas High School in 2018.

She joined hands with Aurora Humanitarian Initiative to start the Amal Clooney Scholarship whose main goal is to send a female student every year from Lebanon to study to be enrolled for a 2 year International Baccalaureate (IB) program at the United World College Dilijan.

Amal and her husband sponsor the college expenses of a Yazidi student, Hazim Avdal whom she met while working with Nadia Murad. The student is currently enrolled at the University of Chicago.

2. Belongs To A Family Of Learned People

She is the daughter of Ramzi Alam Uddin and Bariaa Miknass. Her father has an MBA degree from the American University of Beirut and was the owner of COMET, a travel agency.

Alamuddin's mother is the editor of Al-Hayat, a Pan-Arab tabloid. She is also credited as the founder of International Communication Experts which focuses on publicity photography, event promotion, and celebrity guest bookings.

1. Alamuddin Is A Polyglot

Besides being fluent in English, the Lebanese born lawyer and activist is an eloquent speaker of French and Arabic.