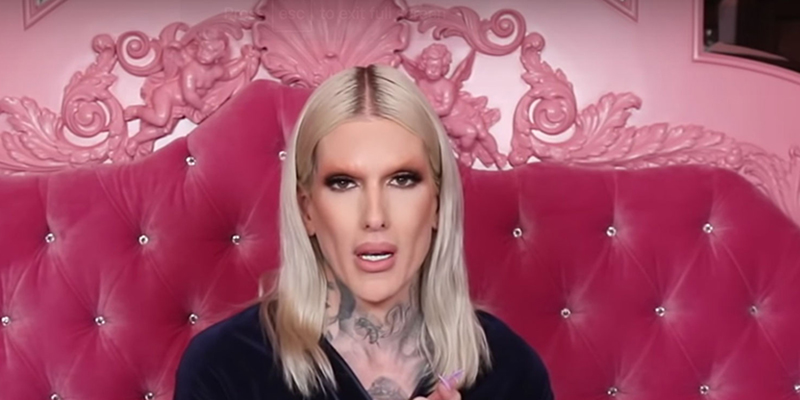 Jeffree Star is a multi-talented American star, who has been active as a youtuber, makeup artist, entrepreneur, singer/songwriter, and DJ. He is also the owner of Jeffree Star Cosmetics. In the recent few years, Star has been popularly recognized as one of the highest-earning YouTubers.

Jeffree Star joined the YouTube way back in 2006. And he promptly established himself as one of the most successful YouTubers. In 2018, Star was ranked #5 in the Forbes' highest-earning YouTubers ahead of the likes of PewDiePie and Markiplier. In 2018, Jeffree Star's total earning from YouTube was estimated to be around $18 million.

He remained on the same position in the list of highest-earning YouTubers in 2019 as well, with a total earning of $17 million. Meanwhile, Jeffree Star's net worth is estimated to be around $200 million as of early 2020.

6. Star Split from His Boyfriend Nathan Schwandt After Five Years of Dating

The 34-year-old American youtuber and makeup mogul broke up from his longtime boyfriend, Nathan Schwandt, in fall 2019. Star announced his split in an emotional YouTube video in early January 2020, titled "We Broke Up."

In the video, Star said he and his boyfriend Schwandt separated weeks before. He further said, "There's no easy way to say this." He further said they both were in a state of shock, and he was devastated after the breakup.

5. Star Bought a Mansion in Hidden Hills with Nathan Schwandt Weeks Before Their Separation

Just weeks before going on their separate path, the lovebirds of five years, Star and Schwandt had bought a mansion in Hidden Hills. The ex-pair splurged $14.6 million for the eight beds and 13 baths property.

Meanwhile, it was also reported that Star and Schwandt had moved into their new mansion just days before they broke up.

4. More Than $2.5 Million of His Properties Were Stolen

In April 2019, Star claimed that more than $2.5 million worth makeup, including many unreleased products, were stolen from his Jeffree Star Cosmetics warehouse. He also released a video describing the event "heartbreaking and a nightmare."

Before the announcement, Star said he was spending his night with the FBI "tracking down black market makeup sellers" in a tweet.

Later, Star claimed he believed the theft was carried out by the cosmetics professionals who were tipped-off by someone who had worked in the warehouse previously.

3. Lost His Father at the Age of Six

Jeffree Star was born Jeffree Lynn Steininger Jr. in Orange County, California, to father, Jeffrey L. Steininger, and mother, Marra Shubyann Lindstrom Steininger. The YouTube sensation suffered a huge loss in his early childhood when his father committed suicide while he was only six.

After the incident, Star was raised by his single mother.

2. Released His First and Only Studio Album in 2009

Star wanted to pursue a career in singing side by side of his other profession. He even used popular social networking website MySpace to boost his musical career. He started his involvement in singing after he befriended Peaches' drummer Samantha Maloney during the mid-2000s.

In 2009, Star released his first and only studio album Beauty Killer. The album consisted of 12 songs, including a title song "Beauty Killer." The album peaked at #7 on the US Billboard Top Electronic Albums chart. Star left music career abruptly in 2013 following a feud with Akon.

1. Has Starred in Two Documentary Series

In 2019, he again portrayed himself in the 9-episode run of The Beautiful World of Jeffree Star. Youtuber Shane Dawson directed both of the documentary series.