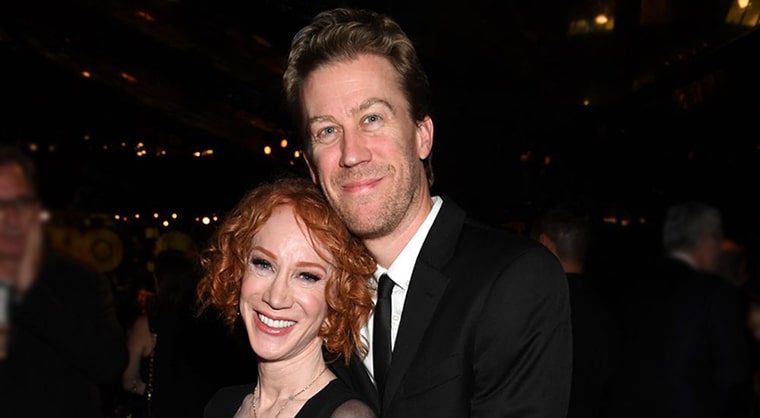 Kathy Griffin: My Life on the D-List alum Kathy Griffin kicked off a new decade as Mrs. Randy Bick. The 59-year-old comedian, actress, and reality star married her longtime boyfriend Bick on Wednesday, 1st January 2020. She revealed her New Year wedding via her Twitter, where she shared a video clip from their nuptials, which, as per her, lasted less than 15 minutes. Actress Lily Tomlin, who officiated the wedding, said:

What was supposed to be a shallow, 'toot it and boot it' one-night stand has grown and flourished into something far more meaningful. They stayed together. Then they couldn't stay away from one another.

Griffin opted for a pearly white, short-sleeved gown by Diane Von Furstenberg, which she accessorized with earrings by Erica Courtney. Bick, meanwhile, donned a black tuxedo for the big day. The pair got married just hours after Griffin announced her engagement in a tweet on New Year's Eve.

Here are seven interesting facts about the couple:

Kathy Griffin and Randy Bick first met in 2011 at a food and wine festival. Griffin revealed on her Twitter that the couple went on their first date in September 2011. In her tweet, the 59-year-old actress shared a photo of the couple sitting in the back of a limo provided by Gloria Estefan.

She further mentioned she asked Bick to pick out one of her long dresses for her wedding, and he picked the same dress that she wore on their first date.

6. Split After Seven Years of Relationship

Griffin and Bick were madly in love for over five years. Ever since they went public as a couple in June 2012, they frequently made their appearance in public and also shared lots of photos on their social media. After around seven years together, Griffin and Bick broke up in November 2018. Kathy announced her separation in a tweet.

5. They Rekindled Their Romance Within Six Months

Kathy and Bick couldn't stay separated for long as they promptly rekindled their romance. Around six months after their breakup, Griffin and Bick were seen together at an event. The former also shared a picture on her social media where she wrote:

You know you wish you could've been a fly on the wall for this dinner. Turns out there isn't one, single celebrity on earth that one of us doesn't know.

One of her social media followers asked, "You back with Randy Kathleen?' to which she replied simply 'Yup.'

Kathy Griffin has worked in the entertainment industry for decades. The gorgeous The Muppets actress has earned millions of dollars from her career. Her net worth is estimated to be around $35 million as of 2020. Griffin resided in Hollywood Hills from 2004 to 2016.

In July 2016, she bought a mansion in Bel Air, Los Angeles, for a whopping $10.5 million. The 13,377 square feet house features eight bedrooms and ten full and two half bathrooms. Since then, Griffin is residing in the mansion, where her husband Bick is believed to move in soon.

Television star Kathy Griffin's marriage to Randy Bick is her second. She was previously married to a Washington, D.C., native Matt Moline-they got married on February 18, 2001. Five years after their marriage, they got divorced in 2005. Griffin had tattooed her wedding ring on her finger, she underwent laser treatment to remove the tattoo.

Meanwhile, after the divorce, Griffin accused her husband of stealing $72k from her during her appearance on Larry King Live. Afterward, Moline released a written statement, in which he declined to respond to the accusations in media, however, he said the allegation saddened him.

2. Giffin Dated A Few More People in the Past

Besides her two marriages, actress Kathy Griffin has had a number of other relationships as well. During 2007, she was rumored to be dating Apple co-founder Steve Wozniak. They were rumored to be together after the alleged pair attended the 2007 Emmy Awards together, where they were interviewed together on the red carpet. By June 2008, the couple was no longer together.

She was rumored to be in a relationship with model and actor Levi Johnston in August 2009, however, the couple never went public as a couple. Later in March 2011, Griffin appeared on The Howard Stern Show, in which she announced that she was romantically involved with actor Isaiah Mustafa. However, Mustafa later revealed he was single.

1. Griffin is a Teetotaller

Even though Kathy Griffin is a well-settled artist in Hollywood, many of her fans might be unaware of the fact that Griffin doesn't drink alcohol. During her 2006 interview, Griffin revealed she is a teetotaller. Also, later in a 2012 interview with Marlo Thomas, Griffin revealed that she oathed never to drink alcohol again after her father tried to save her from choking with a swallow of beer when she was 10.