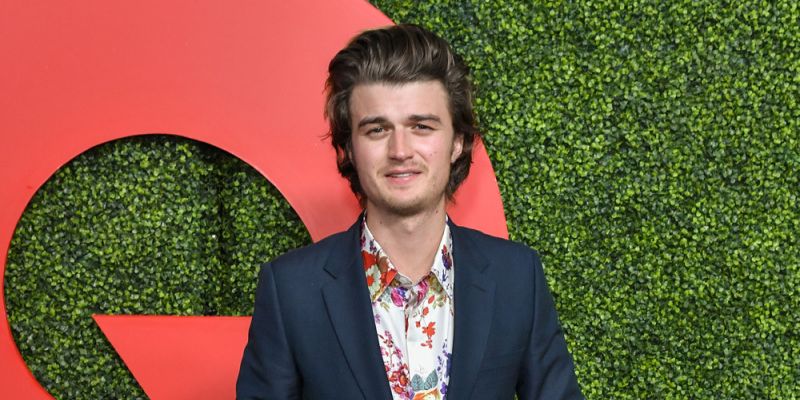 Here we will learn seven exciting facts about the actor. Let's begin.

Keery, born on April 24, 1992, grew up in Newburyport, Massachusetts, with father David Keery and mother, Nina Keery. Nina is an English professor, while David works as an architect.

David and Nina have five children, including Joe, who is second of the five children. Nevertheless, Joe had fun-filled years growing up with his four sisters: Caroline Keery, Lizzy Keery, Kate Keery, and Emma Keery.

Caroline, born in 1990, is the oldest among five siblings and is a teacher. The second sister, named Elizabeth/Lizzy, was born in 1996 is also an English teacher who lives and works in Spain. Joe's sister Kate and Emma are twins and were born in 1998.

6. Is A Fan Of Boogie Nights

And, it seems like Joe Keery is still not over the movie. He recently posted a still from the film on his Instagram account with 7.4 million followers.

He joined Twitter in July 2016 and has 1.2 million followers. Quite an incredible number of fan following he has in his social media! If you want to stay up-to-date with Joe Keery's personal and professional life, you can follow him on Instagram @uncle_jezzy and Twitter @joe_keery.

5. Joe Keery Is Not Related To Ben Schwartz

Joe's character Steve Harrington became a fan favorite with Stranger Things season 2 despite coming off as a douche in the first season. While he does seem to have an uncanny resemblance with NBC's Parks and Recreation star Ben Schwartz, they are not kin to each other.

The fan-made theories about Joe Stranger Things' character being the father of Ben's Parks and Recreation character initially circulated the rumors of both actors being related to each other in real life. What's interesting is that Schwartz actually sent a Happy Father's Day tweet to Keery in 2018, perhaps to keep the joke alive!

Is it his penchant for 80s era or just a tendency to be a typecast for 80s-themed performance? Whatever the reason, the Stranger Things alumnus sure knows how to pay homage to the 1980s film.

In 2017, Keery appeared in the Domino's pizza tracker television commercial themed  'Life Moves Fast.'  Multiple scenes from the ad were recreated from the 1986 comedy film Ferris Bueller's Day Off.

However, the commercial had a dash of transition to modernization with Keery's smartwatch keeping track of the pizza order delivery. Now that isn't something we would see in the 80s!

3. Net Worth Of Joe Keery

Keery, who stands 5 ft 11 inch, went over a hundred auditions before getting a significant recognization for his performance in the Stranger Things.

For season 3, Joe received $150,000 per episode, which would make his net worth $1.2 million given his appearance in all eight episodes of the season. Nevertheless, his work in movies like After Everything, Slice along with television series Chicago Fire, Empire has helped him amass the net worth of $2 million.

Joe Keery also met his girlfriend, Maika Monroe, on the set of the movie After Everything. The two have been dating for over two years with Monroe accompanying Keery in the season three premiere of Stranger Things.

Moreover, Keery has also appeared in KFC and amiibo commercial besides the Domino advertisement. He is currently working in the movie Free Guy while another movie Spree premiered on January 24, 2020, at the 2020 Sundance Film Festival.

2. Joe Is Also A Musician

Keery is one of the guitarists of the garage and psychedelic rock band Post Animal formed in 2014. Along with Joe, Dalton Allison is in the bass. Jake Hirshland plays guitar and keyboard, Javi Reyes and Matt Williams in the guitar, and  Wesley Toledo in the drums.

All members of the band provide lead vocals to the song of their composition. However, Keery no longer accompanies the group on tour since 2019. After releasing a song as a solo artist, the 27-years old released a debut album Djo, Twenty Twenty.

1. Had Auditioned For Jonathan Byers In Stranger Things

In an interview with the Vulture, Keery noted about sending an audition tape for Jonathan Byers, currently played by Charlie Heaton.

However, after the waiting period of two-month, he received an offer for the role of Steve Harrington, who plays the love-interest of Nancy Wheeler, portrayed by Natalia Dyer in the series.

Interestingly, he taped the character designated to him and skyped the tape to the Duffer Brothers, creator of the show. He found out about receiving the role after two weeks and cites the moment as a life-changing one.