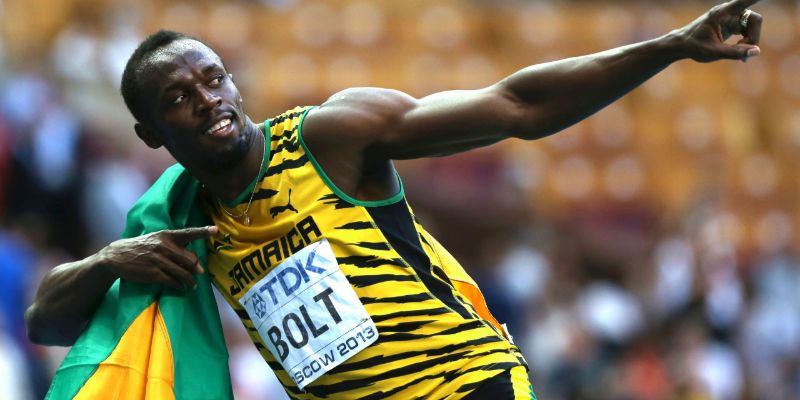 Who hasn't heard of the mighty Usain Bolt?

The man has been in memes, has an avatar in a mobile game, and is The Telegraph's Sports Person of the Decade (alongside Caster Semenya).

That is not even withstanding the 13 individual gold medals and 6 Olympic golds, and the universal consensus that Bolt is the single greatest sprinter in history!

Bolt has transcended the sport for which he is known, becoming a global celebrity. Even now, two years after his retirement from track, his track records remain unrivalled.

In honor of the decade of Usain Bolt, we have compiled a list of 7 inhuman feats of the Jamaican sprinter.

6. He Inspired an Internet Meme

As if Usain Bolt wasn't cool enough, he goes and gives us one of the most meme-worthy moments of all time.

At the last leg of the men 100 meters semi-final dash at the 2016 Rio Olympics, Bolt had a cheeky grin on his face as he turned to the camera, clearly realizing that he was the winner by a long shot.

The world took no time to react, adding their spin on to the already iconic image, and a meme for the ages was born.

5. Bolt Trained to be a Professional Soccer Player

Bolt has publicly stated his passion for soccer. A man of action rather than words, Bolt underwent training with the Australian club Central Coast Mariners as a left-winger, scoring a couple of goals in the process.

His career was short-lived, and by November 2018, he had left the club. In January 2019, he announced that he had forgone pursuing his career in soccer.

4. He Suffers From Scoliosis

Fans were left shell-shocked when Bolt revealed in his autobiography that he had been living with scoliosis.

The condition resulted in his right leg being half an inch shorter than his left. As a professional sprinter, this meant that his left leg stayed on the ground fourteen percent longer than his right and exerted 955 lbs of force compared to the right leg at 1080 lbs.

It is unclear whether Bolt's performance is enhanced because of his scoliosis or if he performs exceedingly well despite his condition.

Of all the records Bolt has broken, his greatest rival would be himself. Aside from surpassing other great performers before him, he has broken his records multiple times.

The table below looks at his personal best over his career.

2. Bolt Became a Sprinter Over a Bet

It is hard to imagine that the "fastest man in the world" might not have even happened, had it not been for a bet!

When Bolt was 12, he made a bet with his friend over who was the fastest runner. A Reverend overheard them and upped the ante with promises of free food for the victor.

When Bolt won decisively, the Reverend said the words that started the ball rolling for Bolt: "If you can beat Ricardo, you can beat anyone." And the world of track-sprinting was never the same.

What does being one of the most decorated athletes in history and having countless awards and accolades to your name give you? Well, money! And lots of it!

According to Forbes, Bolt is worth $31 million. While his primary source of wealth is his illustrious career at the track, his ubiquitous fame and celebrity stature has bolstered his revenue, not to mention the brand endorsements and sponsorships.