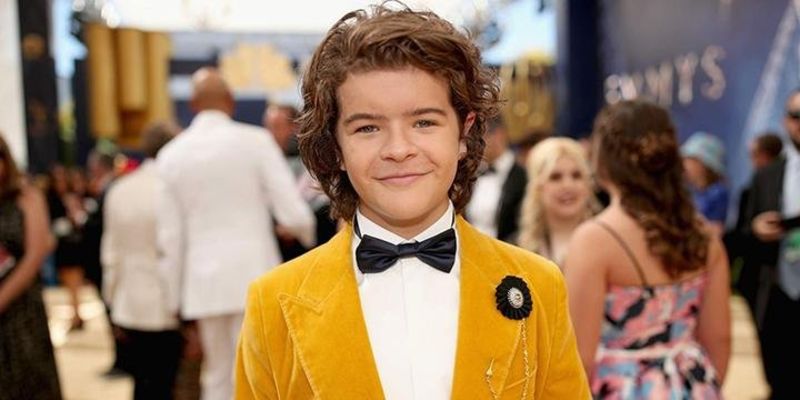 American actor Gaten Matarazzo is known for the portrayal of Dustin Henderson in Netflix's drama series Stranger Things. He earned Teen Choice Awards for his spectacular performance in the series.

There isn't anything Gaten Matarazzo hasn't accomplished in his four years old career. He has hosted a show, has served as spokesman for Verizon FiOS, and has been nominated for various prestigious awards. Here we will learn seven exciting facts of the actor.

7. He is of Italian Descent

The Stranger Things star's parent's ancestry traces back to Italy. In fact, Gaten surname Matarazzo is an Italian family name. The family with such surname is considered to belong from the Southern region of Italy called Campania.

Moreover, surnames like Matarozzi, Materazzi, and Matarazzo are some variants of Gaten's surname. Such surname is said to come from Latium and Tuscany.

In 2017, Gaten made a guest appearance in two music videos. He made a brief appearance in Katy Perry's Swish Swish music video, where he is seen joining forces with Perry in a basketball face-off.

The 17-years old also made an appearance in the band Computer Games' music video. The band which is fronted by former Glee star Darren Criss released the song Lost Boys Life in August of 2017. Matarazzo talked about 'having a blast' with Criss while filming for the music video.

However, Matarazzo's guest appearance doesn't end here. In February of 2020, he appeared in Green Day's new music video Meet Me on the Roof taken from the band 13th studio album, Father of All Motherf*****s.

5. He Grew Up in New Jersey

Matarazzo has an older sister, Sabrina Matarazzi, and a younger brother, Carmen Matarazzo. The Stranger Things actor cites his sister as an inspiration for venturing into a theatrical performance. As a matter of fact, Sabrina is a singer and actress who has worked in movies like The Americans, Beyond Kepler, and Major Key.

At this time, the 17 years old actor had done two broadway show Priscilla, Queen of the Desert, and Les Miserables. He had also worked in the crime thriller series The Blacklist as Finn.

3. He Suffers From CCD

He also utilizes his platform by creating awareness regarding the rare genetic condition. In addition to this, Gaten also aids in fundraising for an organization called CCD Smiles that uses the fund to help people suffering from CCD undergo surgery.

In February 2020, the 17-years old star underwent a surgery in which he removed 14 supernumerary teeth that would allow his adult teeth to come through.

Matarazzo kept his 13.4 million fans updated with his surgery by posting this picture with a heartfelt caption.

He received $20,000 per episode for season two, according to Seventeen. With the show success, Gaten, along with his co-stars Finn Wolfhard, Caleb McLaughlin, and Noah Schnapp, received a pay rise and made $250,000 per episode in season three.

Besides this, the 17-year old actor also has sponsorship deals with companies like Old Navy and Verizon Fios, which can also be credited to his $ 4 million.

In addition to his sponsorship and acting career, Matarazzo is also the lead singer of the band, Work In Progress.

The band has six members, including Gaten. Chad Miller and Griffin Schriever play the guitar, Matt Grayson is in the bass, Gaten's brother Carmen plays the drums, and Gaten and his sister Sabrina are in the vocals.

1. His Character in Stranger Things Was Molded

After Gaten became a cast of Stranger Things, his character Dustin went through some changes. In the show, it is shown that Dustin has Cleidocranial dysplasia, a condition Matarazzo faces in real-life.

In the past, however, his genetic condition had prevented him from getting roles. In an interview with The Sun, he exclaimed,

"That affected pretty much everything. I would go three times a week for auditions all the time and get constant ‘no’".

Nevertheless, the 17-years old has earned significant recognization from his spectacular performance and has been enjoying his flourishing career.