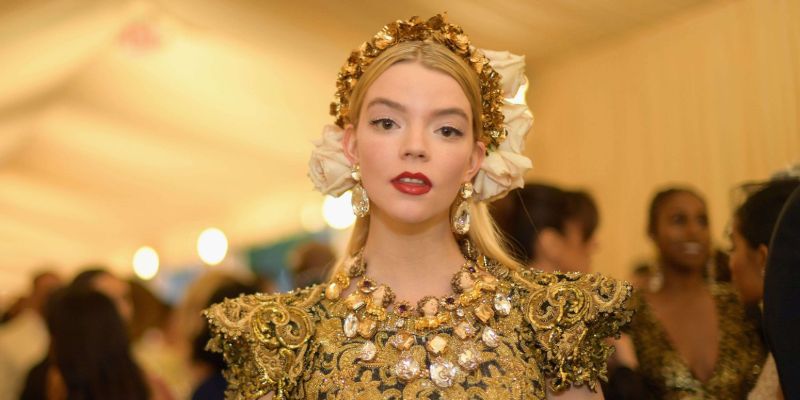 Anya-Josephine Taylor-Joy is known for her role in the horror film The Witch. Similarly, she played Casey Cooke in the horror-thriller films Split, reprising the role in Glass.

Anya, 23, has expressed the Acadamy Award Winner Eddie Redmayne as her celebrity crush. Nevertheless, she is aware of her dream man's marital status and says she wants him to stay that way.

Eddie's role in the biographical drama My Week with Marilyn and playing as Stephen Hawking in The Theory of Everything had us all fall in love with him so we can definitely understand Anya!

Taylor-Joy's mother is English with Afro-Spaniard descent while her father is Scottish-Argentine.

The actress born in Miami, Florida, holds the citizenship of America, Argentine, and the United Kingdom.

In an interview with the magazine Marie Claire, Joy mistook the incident of being chased down by a car as a kidnapping, but it turned out to be a modeling agent trying to scout her. She explained the event,

"I was paranoid when I noticed this car following me, so I turned down the street and noticed it was still behind me. This guy sticks his head out of the window, and he's like, 'if you stop, you won't regret it.'

Anya further went on to provide details about it and also shared the advice she received from Storm Management founder Sarah Doukas.

So, I stopped dead in my tracks, which made no sense! But then, Sarah Doukas gave me her card and asked me to come in with my parents the next day. And, as she drove away, she said, 'oh, and by the way, never do that again. Never ever stop if a car asks you to stop."

Nevertheless, it was through her work as a model that helped her in with an acting agent

4. She Is A Trained Ballet Dancer

Despite beginning her modeling career along with demonstrating her acting skill at an early age, she has other talents under her belt too.

After years of extensive training and proper technique, Anya became a professional ballet dancer though she is no longer a ballerina. But, we might get to see her ballerina skills in future movies, who knows!

Moreover, besides ballet dancing, she can also play the ukulele and electric guitar.

3. Her First Language Is Spanish

Despite being born in Miami, Taylor-Joy moved to Argentina as an infant, so she spoke only Spanish.

She lived between Argentina and England until finally moving to London. Anya refused to learn English for two years when her family moved to London, hoping this tactic would allow her to relocate to Argentine. However, she learned English at the age of eight, attending Queen's Gate School in London.

Anya grabbed positive reviews with her role of Casey Cooke in the horror-thriller films Split along with the character Thomasin in the 2015 period horror film The Witch.

In addition to working in horror movies, she is also hooked up with the ideas of supernatural things. As a child, she would run into the woods looking for witches.

Though she likes such stuff, she is not a superstitious person, further adding she see such things as "something really beautiful" and would hate to live in a world that lacks magic.

Tayor-Joy had always dreamt of becoming an actress, and she received the opportunity after engaging in modeling jobs.

At the age of 14, she used her savings to move to New York. Two years later, at the age of 16, she left school to pursue acting.

Further, the bullying experience also made her leave school and venture into the entertainment industry.

While such a big step was not taken favorably by her relatives, she became fortunate enough to shoot with the actors from Downton Abbey, who ended up connecting her to the acting agent.