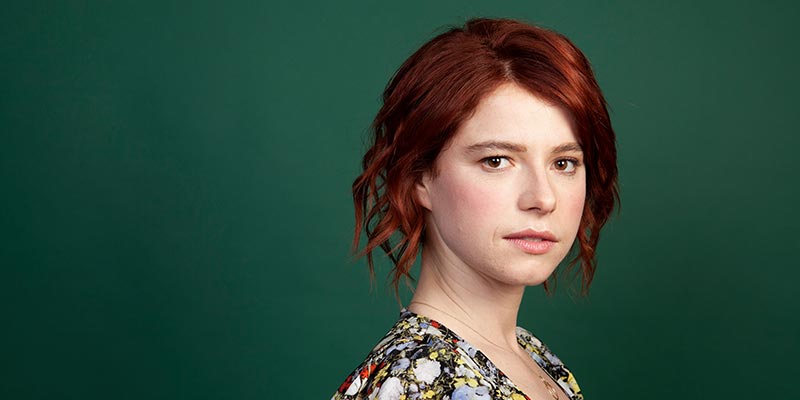 Jessie Buckley is an Irish actress, famously known for her appearance on the BBC talent show I'd Do Anything, where she came second. Besides, the 30-year-old actress also gained immense popularity for her appearance on BBC television series War and Peace, Taboo, and The Woman in White, among others. Most recently, Buckley starred as Lyudmilla Ignatenko in the HBO miniseries Chernobyl.

In today's episode, we are going through seven lesser-known facts of Buckley. Have a look.

Jessie Buckley was born the oldest of five children. She was born on 28th December 1989 in Killarney, County Kerry, Ireland. Buckley has four siblings, three sisters and one brother.

Buckley obtained education from Ursuline Secondary School, an all-girls convent school. Interestingly, her mother, Marina Cassidy, worked as a vocal coach in the school and motivated her to sing during her school days. However, Buckley developed a keen interest in acting later.

6. She Used to Play Male Roles in School

Buckley got interested in acting from her school days and started participating in a number of school productions.

As a matter of fact, she is known for the male parts she did in her school plays. Notably, she played a male lead role of Freddie Trumper in Chess and Jets gang founder Tony in the musical West Side Story.

Besides, she was also a good student of music, having achieved Grade eight in clarinet, harp, and piano with the Royal Irish Academy of Music.

5. Buckley Is The Royal Academy of Dramatic Art Graduate

Jessie Buckley continued her passion for acting on her college days too. And she later studied acting at The Royal Academy of Dramatic Art. She completed her graduation from RADA in 2013.

Before Jessie Buckley started studying acting in the Royal Academy of Dramatic Art, she has made her ways to the limelight as the contestant of the BBC reality show, I'd Do Anything.

The show that premiered on 15th March 2008 searched for a new and unknown lead to play Nancy in a London West End stage revival of Oliver!

Buckley was able to reach the final of the competition, however, she lost the title to Jodie Prenger.

In 2019, actress Buckley played the role of Lyudmilla Ignatenko in the historical drama television miniseries, Chernobyl. The series depicted the Chernobyl nuclear disaster of April 1986, followed by unprecedented cleanup efforts.

In 2018, actress Jessie Buckley portrayed the character Rose-Lynn Harlan in a British musical drama film, Wild Rose. The role earned her a broader recognition. Moreover, she also won the BAFTA Scotland award for Best Actress in Film in 2019.

1. What is Jessie Buckley's Net Worth?

The I'd Do Anything participant, Buckley started her acting career in 2014, appearing as Kitty batten on Endeavour. A year later, she landed the main role of Marya Bolkonskaya in War & Peace. Talking about her film appearances, she has worked in three films until 2019 and has worked in two more films, which are set to be released in 2020.

Working for over five years on television and in films, Buckley has earned a handsome sum of money. Looking at her popularity, she can be presumed to earn hundreds of thousands of dollars each year. Buckley's exact net worth has not been revealed yet, however, the gorgeous Wild Rose actress is estimated to be worth around $500k as of 2020.