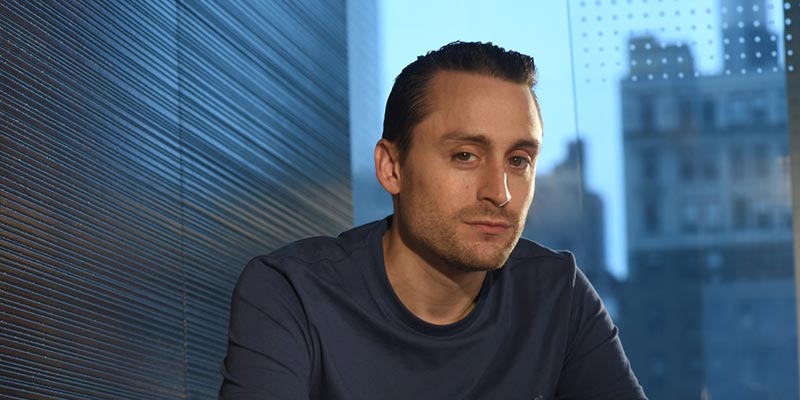 Kieran Culkin is an American actor, famously known for his roles in films like Igby Goes Down, Scoot Pilgrim vs. the World. His famous stage works include many productions of Kenneth Lonergan's play This is Our Youth. Talking about the television works, he has famously worked in Frasier, Go Fish, Fargo, and Long Live the Royal, among others.

He currently plays Roman Roy in the American satirical comedy-drama television series, Succession. The series that additionally stars Nicholas Braun, Brian Cox, and Hiam Abbass, completed its second season in 2019 and was renewed for the third season in August 2019.

Actor Kieran Culkin was born in New York City on September 30, 1982. Culkin was one of the eight children born to father Kit Culkin and mother Patricia Brentrup. His seven siblings include Christian, Dakota, Macaulay, Jennifer, Rory, Shane, and Quinn Culkin.

All the eight siblings were raised as performers in New York City. Culkin's sister, Dakota, who was three years older than him, died in a car crash in 2008.

6. His First Film Work was in "Home Alone"

The role earned Macaulay three prestigious awards, including the American Comedy Award for Funniest Actor in a Motion Picture. Home Alone was one of the most successful films of 1990, which amassed $476.7 million at the Box Office against its $18 million budget.

5. He Has One Child with Wife Jazz Charton

The famous Igby Goes actor Culkin remains private when it comes to his family and relationships. Yet, it is well-known that the 37-year-old New York Native is a happily married man.

Culkin and Jazz Charton tied the knot in 2013 after a few years long courtship. Culkin and his wife gave birth to their first child, a daughter, Kinsey Sioux, on September 13, 2019.

Kieran Culkin stands at a height of 5 ft 6 inches. His brother Rory Culkin also stands at the same height while Macaulay Culkin is 5 ft 7 inches tall.

3. Culkin Has Been Estranged from His Father Since His Parents' Split

Actor Kieran Culkin's parents were never married. The pair, who were together for decades and gave birth to eight children, separated in 1984, when Kieran was only two years old. He has not met his father ever since.

2. His Net Worth is in Millions

Actor Kieran Culkin has earned a handsome fortune from his acting career. According to Celebrity Networth, Culkin possesses a decent net worth of $4 million.

He has been active on television, films as well as theater work. But most prominently, he has worked in movies which happen to be the primary source of his earnings and net worth.

1. Kieran Culkin's Role in "Igby Goes Down" Earned Him a Couple of Awards

Starting from a small appearance on Home Alone, actor Culkin went on to grab immense popularity through his work in Igby Goes Down in 2002. His role as Jason "Igby" Slocumb Jr. earned him a nomination for Golden Globes Award for Best Actor.

Besides, he clinched the Critics' Choice Movie Award and Satellite Award for the role.