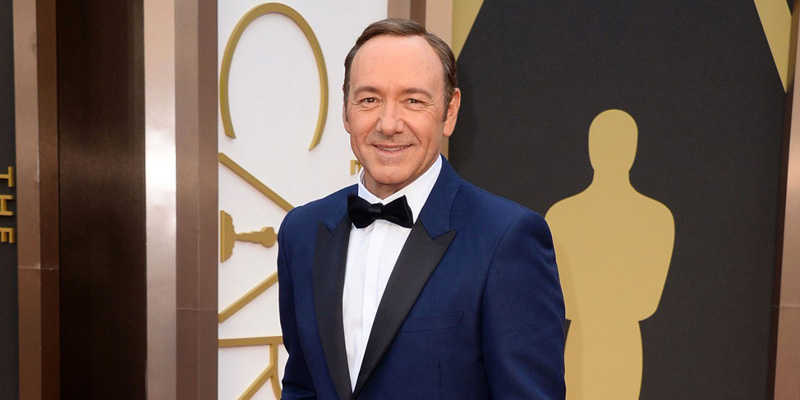 Starting a career as a stage actor, Kevin Spacey went on to capture the stardom with his acting and singing. The New Jersey-born actor gained critical acclaim for his performance in the neo-noir crime thriller The Usual Suspects in 1995. The role earned the first Academy Award for Best Supporting Actor for Spacey. He went on to win another Academy Award for Best Actor for drama movie, American Beauty.

Spacey's acting credits also include the comedy-drama film Swimming with Sharks and the psychological thriller Seven. One of the highly admired actors of the modern era, Spacey, however, faced a tough time after he was accused of making a seual advance toward a 14-year-old. The accusation was followed by several other people who accused the actor of seual harassment on several occasions.

It resulted in Netflix cutting ties with Spacey ahead of the last season of House of Cards. He was also removed from the 2017 crime thriller film, All the Money in the World, and was reshot with actor Christopher Plummer.

Here are seven interesting facts about the actor.

Kevin Spacey was born as Kevin Spacey Fowler to Thomas Geoffrey Fowler and Kathleen Ann (nee Knutson) in South Orange, New Jersey. Spacey has a brother, Randall "Randy" Fowler and a sister Julie Ann Fowler Keir. As a child, Spacey had burned his sister Julie's treehouse down, which caused his parents to opt for military school.

6. He was Expelled from Northridge Military Academy

Spacey was enrolled to Northridge Military Academy, his days in the school was cut short.

Spacey was reportedly expelled from the school after he fought with one of his classmates, in which Spacey hit him with a tire. Afterward, Spacey enrolled at Chatsworth High School in Los Angeles, from which he graduated in 1977.

5. He Had Suffered a Head Injury in London

In 2004, Kevin Spacey was in London for his shows, and he made headlines after he said he was mugged while strolling his dog. He also reported to the police, however, later dropped the complaint saying he was not robbed but conned by youth into handing over his mobile. He also said that he made the fake report in the hope police would find the kid out.

Spacey said of the incident that when he chased the youth, who fled with his mobile, he tripped over his pet and fell onto the ground getting an injury in the head.

4. He Is One of Seven Actors To Win Two Oscars in Two Nominations

Kevin Spacey, the legendary actor, has won several accolades in his lifetime. Among them, winning Oscar might be a special moment for the actor himself. Spacey has won two Oscars in his decades-long career, and interestingly, he won the awards from just two nominations. The first one, he won in the year 1995 for the best supporting actor for The Usual Suspects. Second time, Spacey bagged the award for the best actor for American Beauty.

Meanwhile, Spacey happens to be one of only seven actors to have 2-0 records in Oscars. The other actors who have won two Oscars out of two nominations are Luise Rainer, Vivien Leigh, Helen Hayes, Hilary Swank, Christoph Waltz, and Mahershala Ali.

Very few of us might be aware of the fact that actor Kevin Spacey once hosted the Nobel Peace Prize Concert along with actress Uma Thurman. It was back in December 2007, when Tommy Lee Jones was set to host the show but dropped out at the last moment.

Actor Kevin Spacey's se*uality has been questioned time and again since the '90s. However, Spacey had been remaining out of the topic until fall 2017 when the actor came out as gay. Spacey said,

I have had relationships with both men and women. I have loved and had romantic encounters with men throughout my life, and I choose now to live as a gay man.

Spacey revealed his seual orientation following actor Anthony Rapp accused him of making a seual advance when he was only 14 years old. Before coming out of the closet, Spacey apologized to actor Rapp for the misdemeanor back in 1986. After he came out, the prominent members of the gay community criticized his decision saying he only did that to shift the focus from Rapp's accusation.

1. Many Other Followed Actor Anthony Rapp in Accusing Spacey of Se*ual Harassment

Actor Anthony Rapp accused Spacey of se*ual harassment on October 30, 2017, which was followed by a series of people. The following day, filmmaker Tony Montana alleged Spacey of forcefully groping him in a Los Angeles Bar back in 2003.

On November 1, an anonymous man claimed he woke up to find Spacey lying on him at his New York home in the mid-80s. The man said he was 17 years old at the time. The same day, two British men came forward claiming Spacey had exposed himself to him in 2010 when he was working at a hotel in West Sussex. Another named Daniel Beal claimed Spacey exposed to him and invited a 19-year-old boy to his room. He further said Spacey later gave him a £5,000 worth watch.

Many others also came forward accusing the actor. Among them, one was the King of Norway's former son-in-law, Ari Behn, told Spacey groped him after a Nobel Peace Prize concert in December 2007.