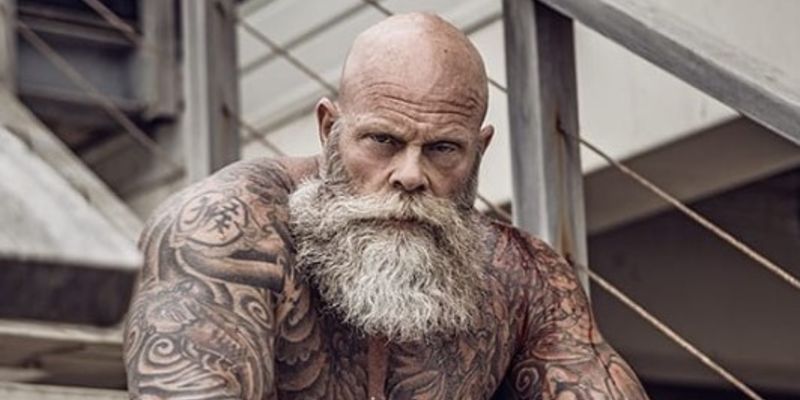 Juan Rekers is truly an extraordinary person, and the tag 'badass' is quite befitting too!

The 55-year-old fitness model has been a well-known face in the realm of bodybuilding. He has also initiated a specialized fitness training for people with mental illness.

Besides the profession of bodybuilding and acting as a fitness model, he has a passion for tattoos too.

In this article, let's have a look at his career and the tattoos he have inscribed on his body.

In the domain of professional bodybuilding, it is common to see too many tattoos or other accessories embedded in the human body to enhance the physique.

Juan Rekers has kept up the trend too, but extraordinarily. He has a phenomenal beard extending past the chin that gives him a distinctive look.

Juan also has head-to-toe covering tattoos. There are dozens of designs, with each one completely different from the other, spread over his body. While some designs are fully colored, most are in solid black-and-gray.

The tattoo is primarily put on the body to emphasize the shape of certain aspects of the body, a secret the former American bodybuilder and businessman Rich Piana had revealed in his YouTube channel. Well, everyone wants the hard work they put in their work to be noticed, and bodybuilders are no exception.

At the age of 55, the Dutch 'Independent coach' has introduced FAT (Fitness As Therapy) for people with Mental Disorders. He started working independently since November 1, 2015. However, he has been a bodybuilder for 36 years and is often called a beard and tattoo model.

Juan had acknowledged the benefits of fitness back in 1983 when he was a victim of Mental Disorders like ADHD and BPD. Perhaps this played a role in his decision to utilize fitness as a tool to coach people with mental illness. Further, he says that fitness is therapy and much more than competing during contests.

Even at the age of 55, Juan possesses a burst of energy and ambition to work for the welfare of the people. He works as a fitness coach on Dragon Coaching. His zeal for fitness is truly an inspiration for all. He stated,

"When you grow older, your body will alter. Decrease of Testosterone, and increase of estrogen damages your body. Less power, bigger belly! Besides, fitness keeps the balance in body and mind; last, it's perfect for me to control my Mental Disorders."

While in the free time, he qualifies as a Viking and cruises around the street in his Harley-Davidson.

On a respite from the bodybuilding scene, he visits concerts and likes to listen to a nice record on vinyl. Needless to say, he is an avid visitor to the gym, whatever the situation.

With the pure intensity inside and out, Juan Reker takes bodybuilding as a lifestyle rather than a sport, which is why he uses the platform to support people with mental illness.