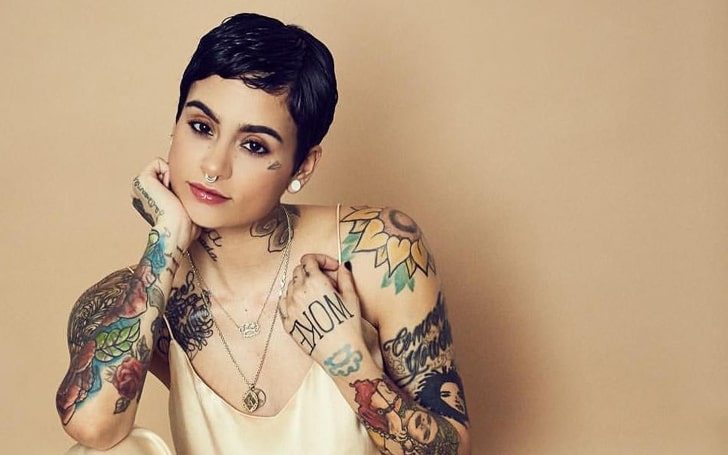 Kehlani, born Kehlani Ashley Parrish, is a renowned singer, songwriter, and dancer. The 24-year-old Oakland native went through severely extreme situations during her teen from stealing iPhone and grocery items to spending nights on a couch. But now, Kehlani is a well-established diva who has a number of accolades under her name. As the years passed by, Kehlani started developing a series of new interests; most of all, she has become an avid tattoo lover.

By the time Kehlani participated on America’s Got Talent, she had not even got her first tattoo. But now, she has over 20 tattoos in her body. Let’s check out some of her interesting tattoos and the meaning they convey.

1.Sleeve Of Roses On Right Hand

The most artistic and visible tattoo Kehlani has got is on her right hand. She has covered her entire right hand with colorful roses, giving an appearance like the “sleeve of roses.”

The 24-year-old American singer’s struggle as a singer, as a woman, is not less than a fighter. Her struggles in her early days have made her confident enough to face any situation in her life like a lioness, which indeed is reflected by a lion-faced tattoo on her upper forearm.

Kehlani has inked almost every part of her body, but the most significant one we believe is one on her left shoulder.

The sunflower tattoo she has inked on her shoulder shines as the singer cheers her life every single day. The singer has, however, not revealed the meaning of the art.

The Grammy-winning singer, Kehlani, has inked some parts of her body with Spanish words. The one on the right side of her temple reads “Espíritu Libre,” which means ‘free spirit.’ Another one, her right side of her neck, says “Perdida y Encontrada,” which has a literal meaning “Lost and Found.” To the tattoo, the singer once said: “I think it’s a reminder if I do get lost again, I can always find myself.”

America’s Got Talent fame has got an ocean wave tattoo on the left part of her neck. The art symbolically represents the desire to live a life of freedom, which the singer is doing indeed.

Kehlani has more than a dozen tattoos in her two hands. The upper part of her right dorsal palm features beautifully designed, Paisley. She has inscribed a word, “LaDreamer,” which in fact, is a nickname of her fan “La Dreamer,” besides the paisley and below her little finger. In four fingers of her right hand (going from index to little), Kehlani has inked a peace sign, a triangle, a mickey mouse, and a heart.

Moving on to her left palm, she has got a lotus art covering original “WOKE” ink she might have inscribed before. In the fingers, she has got: an arrow, an anchor, a Venus sign and a number, 510, going from index finger to little finger. In the same pattern, Kehlani has inked a word “HOPE” below the aforementioned arts.

Alike her hands, Kehlani has also inscribed a number of tattoos on her legs. She has inked an impressive tattoo of a spider and a rose penetrated by a knife. She has tattooed a fictional cartoon character from Rocket Power, Reggie Rocket, on a skateboard on her right calf. She said it is one of her favorite tattoos because she was a tomboy in her childhood days alike Reggie.

On the backside of her left calf, she has inscribed some words that say, “TODAY IS THE BEST DAY EVER.”

Singer Kehlani has made a tattoo of a dancing couple, a girl in the white shirt on her left inner thigh, and a boy in a suit on her right inner thigh. The dancing couple is believed to have taken from the movie Pulp Fiction. The beauty of the tattoo is she can make the characters dance by moving her legs.

Besides, she has also got a tattoo of a skateboard, featuring a palm tree, ocean waves, and an Oarsman inside, on the front side of her right thigh.

Kehlani has inscribed two beautiful faces on her left arm. The faces are of a famous singer Lauryn Hill and a Mexican artist and feminist icon, Frida Kahlo.

It seems as if the singer isn’t done inscribing her body yet. In recent years, she has added a few more tattoos on her arms.