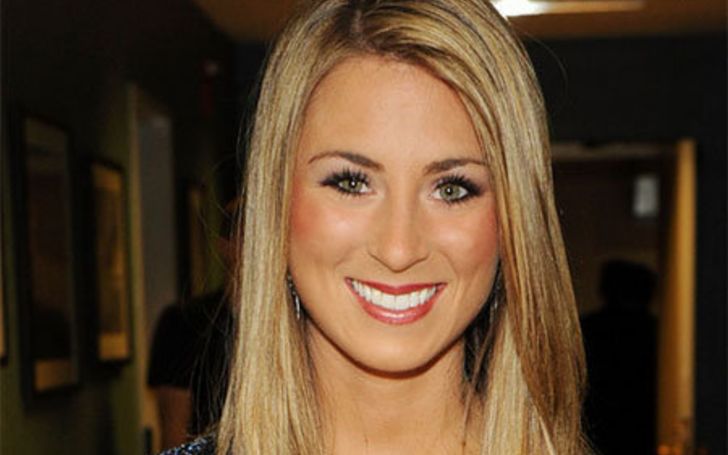 Tenley Molzahn is an American reality star as well as a health coach. She is widely known for her appearances in ABC’s The Bachelor season fourteen, Bachelor Pad season one, and Bachelor in Paradise season two. Besides, she is a professional dancer who has danced and performed at Disney.

Tenley Molzahn was born on 19 May 1984 in Littleton, Colorado. As of 2019, she is at the age of 34 with the birth sign of Taurus which define her personality as practical, and ambitious. Her birth name is Tenley Nora Molzahn. Her mother name is Beth Molzahn and also she has a sister named Karley Styles.

A reality television personality was married to her first love Ryan Natividad, in 2007. The two lovebirds were seen sharing strong love connection for two years but their relationship was short lived as they got divorced in 2009.

After being separated from Ryan, she got involved in a romantic relationship with Jake Pavelka in 2010. However, in the same year, their love story ended very soon.

Later, Tenley Molzahn was in a romantic relationship with Kiptyn Locke. The couple started dating since August 2010 and they were in a serious relationship for four long years. Unfortunately, they broke up and got separated in 2014.

Currently, Molzahn tied the knot with her longtime boyfriend Taylor Leopold, on April 27, 2018. Till date, they both often post pictures of each other in their social media and seems they are enjoying their life.

So much excitement has been happening around us, and life just gets busy. But checking out, just the two of us will always be something I cherish! 💕 This is why you marry your best friend! — For those of you that have asked about our last minute romantic getaway across the border this last weekend, I made a highlight on my profile page “Valle Guadalupe” and posted our last two trips there so you could see the stops we made if you’re planning your own trip! 😘

Tenley Molzahn’s Net Worth and Career

The reality star has an estimated net worth of $700 thousand. She has earned a decent amount of money from her career. As per some sources, the average salary of a dancer is  $14.25 per hour so, she might be receiving in the same range from her dancing career.

Reflecting on her profession, Molzahn started her career as a dancer. In 2002, she moved to Los Angeles for Walt Disney Productions. She danced and performed at Disney for around six years. After that, she played Ariel’s main role in the ‘Under the Sea’ tour in Tokyo Disney for around nine months.

Then, she appeared as a cast member on the reality show of ABC’s The Bachelor Series, which first appeared on January 4, 2010. She joined the cast of Bachelor Pad, the ABC dating-based reality TV show, where former contestants from The Bachelor and The Bachelorette compete and play games for an opportunity at a cash prize of $ 250,000. The show was premiered on ABC on 9 August 2010.