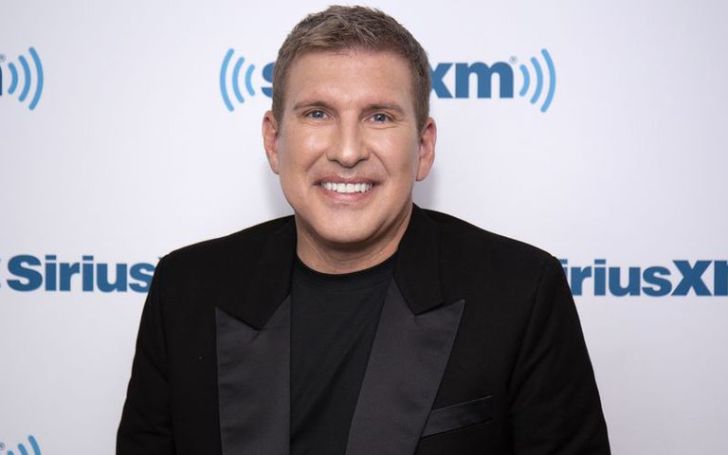 Todd Chrisley is an American businessman, real estate agent, reality TV star, and actor. He is popular for appearing on the USA Network reality series Chrisley Knows  Best. He is the head of the Chrisley family and has been working on the show since 2014. However, he has experienced a different taste of life before stardom that included a nasty divorce, financial troubles and lots of controversies. Here’s everything you need to know about him.

Todd Chrisley was born on 6 April 1969, in Georgia, USA. According to his date of birth, he turned 49 years old, as of 2018. His birth name is Michael Todd Chrisley. He is the son of Gene Raymond Chrisley(father) and Faye Chrisley (mother). Sadly, his father passed away on 11 July 2014. He grew up with his siblings; Randy Chrisley and Derrick Chrisley in Westminster, South Carolina.

Todd Chrisley is a married man and has five children from his marriages. He was married to his high school girlfriend Teresa Terry whom he met at the age of 21 years old; Teresa was 19 years old at the time. Together they had two children; Lindsie Chrisley and Kyle Chrisley. After staying in a relationship for a few years they divorced in 1996. According to DailyMail, Terry claimed that Todd had been physically and verbally abusive. After the divorce, Lindsie and Kyle live with their father.

On May 25, 1996, Chrisley married, Julie Chrisley, who appears with Todd on Chrisley Knows Best. The couple has two daughters named Grayson Chrisley and Savannah Chrisley and son Chase Chrisley. Chrisley’s children are also involved in acting.

Chrisley’s family is active on screen, as all family member has worked on the TV series Chrisley Knows Best.

Todd Chrisley‘s Career and Net Worth

In 2004 Todd started Executive Asset Management LLC and his journey remained in business until 2008. Chrisley played in several TV series in his career. He appeared in many series like Steve Harvey and The Domenick Nati Show. On March 11, 2014, Chrisley has played on American television reality show, Chrisley Knows Best, based on the life and story of the Chrisley family.

Todd has seen both good and bad times. Todd Chrisley is quite secretive about his net worth. Different sites show different information about his earning.

According to the Investopedia, Todd has an estimated net worth of -$46 million. But according to Earnthenecklace, his total net worth is about -$5 million.

Currently, he is facing several downsides to his business. He became the topic for the bankruptcy case. In Georgia Todd owns a house around $2.4 million spreading up to 30,000 square foot. Todd spends over a $300,000 annually only on clothing. He also buys a black Mercedes which is worth more than $50,000.

Behind his luxurious vehicle and fancy dress, his financial circumstance has been uncertain. He had been bankrupt since 2012, and he had battling it out in the court. Todd had an aggregate of $155 as current assets and $4.2 million as fixed assets. However his total $49.4 million

For his bankruptcy, he filed a petition for Chapter 7 bankruptcy protection in August 2012. The trustee had suspicions so, they investigated the wealth of Todd, but could not find any things. Still, he is in debt and unable to pay off his expenses

Some of the sources have disclosed that the reality TV star was signing a multi-year deal with various shows the deal was for $75 million. The deal was for multi-year and would incorporate several shows. But it is not sure that”Chrisley Knows Best” would be among those shows or Todd needs to leave the show.