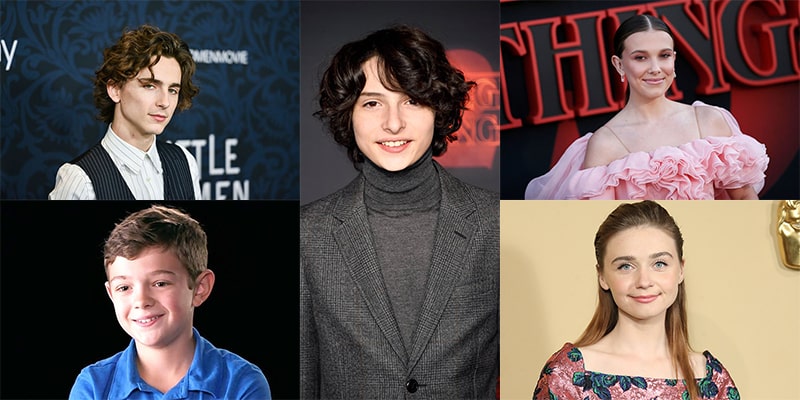 After many years of having the likes of Leonardo Di Caprio, Johnny Deep, Tom Cruise, Brad Pitt ruled Hollywood, few young actors who have perfected the art of acting finally got their chances to shine.

There are a plethora of young actors in the entertainment industry today who have utilized their platforms by taking roles that support people dealing with difficult issues like mental health or sexual harassment.

Besides such spectacular performance, they also give eloquent and nuanced interviews about their work, which is really hard work in itself.

If you have been keeping abreast of the latest movies and series, you might have already come across this amazing aspiring actors. Let's begin.

This talented actress is just ten years old, with seven nominations and five awards under her belt.

Brooklynn appeared in the movie The Florida Project, where she played the character of Moonee, a six-year-old girl living with her rebellious single mother in a motel.

She has a busy year ahead with two upcoming projects: a supernatural horror film The Turning and a drama film The One and Only Ivan alongside veteran actors like Angelina Jolie, Danny DeVito, Helen Mirren, Sam Rockwell, and many other notable actors.

Half witch and the half-mortal with the moral compassion and unwavering loyalty for her friends! Kiernan garnered positive reviews from critics and became nominated in three different awards for her performance as Sabrina Spellman in Netflix's Chilling Adventures of Sabrina.

Named "The 25 Most Influential Teens of 2014" by Time magazine, Kiernan debuted on the television when she was just five months old.

Kiernan has played in various films and series, most notably Mad Men, for which she won six awards.

Jessica Barden had small roles in numerous movies, including Hanna and The Lobster. But, her role in comedy-drama series The End of the F***ing World definitely propelled her career. She is among the top breakout stars.

Apart from series and television, she has also appeared in music videos of artists like Ozzy Osbourne and Conan Gray.

Eventually getting bored with his hobby of being a psychopath and displaying emotion and falling in love, not a day-to-day love story! But Alex's character was no average teenager and nor is Alex himself.

Getting inspired to be an actor after having to make his own game for entertainment, he made a film debut at the age of 19 as young Alun Turning in the critically acclaimed movie The Imitation Game.

He also appeared as the main character Kenny in an episode of Black Mirror.

Winner of Cannes Film Festival' Trophee Chopard award, Joy rose to prominence with the film The Witch. It landed her nine nominations, and she won six awards, including an Empire Award for Best Female Newcomer.

She also played the character of Casey Cooke in critically acclaimed Split and later in dark comedy thriller film Thoroughbreds.

Anya played the lead actress in the music video for Skrillex's remix of GTA's song Red Lips. She is also a nominee in the 2017 BAFTA Rising Star Award.

Anya has four upcoming movies all set to release in 2020, Emma, The New Mutants, Last Night in Soho, and Here Are the Young Men.

Noah had a lead role in the black comedy movie Suburbicon,  directed by George Clooney.

His performance surely impressed Clooney as he went on to recommend Noah to John Krasinski, director of A Quiet Place. Eventually, he grabbed the role of Marcos Abbott, which he will reprise in the A Quiet Place II set to release in 2020.

He is also a cast in the adaptation of Stephen King's novel My Pretty Pony.

Australian native Katherine made a name for herself with the character Hannah Baker on the hit Netflix series 13 Reasons Why. For this, she received five nominations, including Golden Globe Awards.

She also appeared in the movie Knives Out, for which she won 11 awards.

As for 2020, she is busy shooting for Netflix's upcoming television series Cursed.

Hard to find an actor who would happily shave her hair for a role and think of it as a job. No wonder Millie is the youngest person ever to be honored as one of TIME's 100 most influential people and to be appointed as a UNICEF Goodwill Ambassador.

Brown is prominent for her role as Eleven in the Netflix science fiction-horror series Stranger Things. For this, she received Primetime Emmy Award nominations for Outstanding Supporting Actress in a Drama Series.

Her film debut came in 2019 with film Godzilla: King of the Monsters. She will reprise her role in Godzilla vs. Kong scheduled to release on November 20, 2020.

A gullible being willing to accept fantastical explanation behind a complicated situation, yup that is what defines Finn's character in the critically acclaimed Netflix's Stranger Things.

But, Finn just doesn't seem to rest on his laurels. He has finished the shooting for horror film The Turning alongside Mackenzie Davis and Brooklynn Prince. It will release on January 24, 2020.

Another project is Ghostbusters: Afterlife scheduled to release in July of 2020.

Well, it can be hard to call an Oscar-nominated actor as up-and-coming, but if he accomplished notability at just 22 and in the first significant role, then why not? Surely, his performance in Call Me By Your Name garnered critic's praise.

Timothee has appeared in numerous projects after this, which has displayed his acting skills, and all of them have been equally serendipitous for him.

He has five upcoming projects as of January 2020 which include Denis Villeneuve's Dune, Wes Anderson's ensemble drama The French Dispatch.