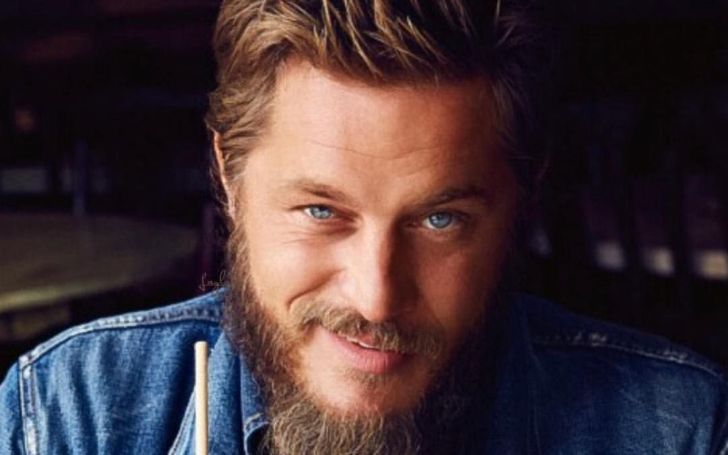 Travis Fimmel is an Australian actor and former model, well known for his role as Ragnar Lothbrok in the History Channel series Vikings. Also, he is best known for his performance in the TV series, The Beast and the film, Warcraft.

Travis Fimmel was born under the birth sign cancer on July 15, 1979, in Echuca, Australia. Regarding his family, he was raised in his family farm in Lockington along with his two elder brothers. His father name is Chris Fimmel and mother Jennie Fimmel.

Talking about Fimmel’s education, he attended the St Kilda Football Club in the AFL but had to quit football after his leg fracture. Later he enrolled RMIT majoring commercial architecture and engineering.

Travis Fimmel is possibly single at present. Till now, he hasn’t confirmed anyone as his girlfriend, however, he has been romantically involved to several actresses including Paula Patton, Joy Bryant, Ceara Lynch, and Nita Kuzmina in the past. Similarly, in 2002, he was in a relationship with Rachel Hunter and Jessica Miller.

Travis Fimmel’s Career and Net Worth

Travis Fimmel has an estimated net worth of $3 million. He has earned his net worth from his successful career. Likewise, he received a box office collections

Fimmel has reached a new height following his marvelous performance in the one of the most viewed and highly rated historical TV series Vikings. He was paid in the between of  $100,000 – $400,000 per episode.

Travis Fimmel began his career as a model. After that, he was spotted by a talent scout for Chadwick Models agency at a gym.

Fimmel played the main role in 2012’s ‘Harodim’, which was called ‘The Lazarus Protocol’. Also, he played with Billy Bob Thornton and Eva Longoria in the comedy flick ‘The Baytown Outlaws’ in 2013. Also, he starred in ‘Warcraft’, a live-action adaptation of the video game of the same name in 2016.

Fimmel has appeared in ‘Lean on Pete’ a British-American drama film, directed by Andrew Haigh, based on the novel of the same name by Willy Vlautin in 2017.

In Addition, Fimmel featured in BlackBoxTV’s ‘Reawakening’ in 2012 where he was cast with a Calvin Klein model-turned-actor, Dylan Bruno. He was the lead character in the television series ‘Vikings’, in which he co-starred with Jessalyn Gilsig, Katheryn Winnick and Gabriel Byrne. He played Ragnar Lothbrok,  in the Viking leader.

In 2016, Fimmel starred in ‘Warcraft’, a live-action adaptation of the video game of the same name. He worked in ‘Lean on Pete’ a British-American drama film, directed by Andrew Haigh, based on the novel of the same name by Willy Vlautin in 2017.