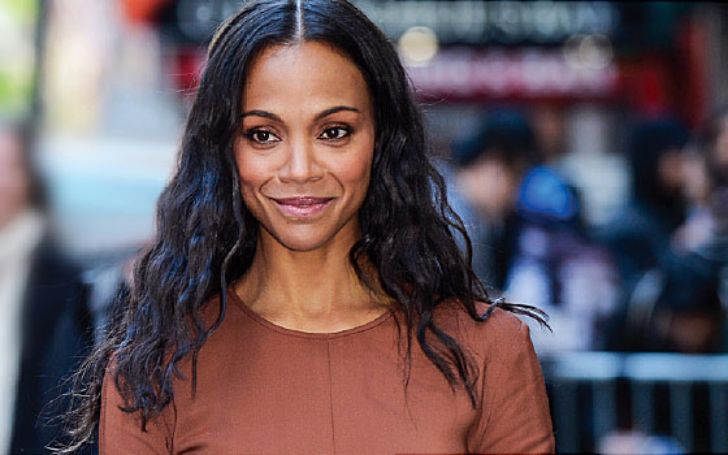 American actress and dancer, Zoe Saldana is best known for her portrayal of Gamora in multiple Marvel Cinematic Universe films. She is one of the trained dancers who later on started playing in the famous Hollywood movies and series as a lead character. Her other notable roles include blockbusters like Avatar, Guardians of the Galaxy, Star Trek. For more detail have a look at this article.

Zoe Saldana was born under the birth sign Gemini on June 19, 1978, in Passaic, New Jersey, the USA. She was born to father,  Aridio Saldana, and mother, Asalia Nazario as a Zoe Yadira Zaldana Nazario. She spent most of her childhood days in Jackson Heights, New York along with her two sisters: Cisely and Mariel.

Later on, she moved to the Dominica Republic to her grandparents home along with her sister and mother after the death of her father.

Zoe has been trained various of dance form from  ECOS Espacio de Danza  Academy. Among all dance form, she was most interested at Ballet dance. At the age of 17, she moved to New York and continue her dancing and started taking part in various places.

The 40-year-old actress has been engaged twice till the date. Currently, she is living a happy married life with Italian artist Marco Perego. The couple started dating since 2013 and tied the knot in secret wedding ceremony in June of the same year.

After marriage, Marco adopted her surname and the couple became Zoe Saldana-Perego and Marco Perego-Saldana.

Before that, she was engaged to her ex-boyfriend, Keith Britton in 2010. But the former couple couldn’t make it to the big day as they decided to end their relationship after being together for more than 11 years.

Zoe is the mother of three children together with her husband, Marco. The couple welcomed twins son: Bowie and Cy in 2014 and in 2017 Feb she gave birth to their third son, Zen.

Zoe dated actor Bradley Cooper in 2011, however, the couple couldn’t continue it more than two years and separated.

Once there was a huge rumor of Zoe Saldana having affair with Ben Affleck. However, the news didn’t come out true as a Ben Affleck is still together with his ex-wife, Jennifer Garner and co-parenting their children.

Zoe Saldana’s Career and Net Worth

Zoe Saldana started her career after she made a guest appearance in the TV series in Law and Order. Her first starring role in the film was in Center Stage (2000). Prior to this, she has appeared in various movies as a supporting character.

Her career took a breakthrough after she appeared in the film Star Trek as Nyota Uhura and Avatar as a Neytiri. Following that, she appeared in a number of top notched movies such as The Losers, Death at a Funeral, The Heart Specialist, and more.

Besides, Zoe also appeared as Gamora in the superhit Marvel superhero movie, Guardians of the Galaxy. Apart from that, she also debuted in ad shows with Calvin Klein’s innerwear.

Up until know, Zoe Saldana has 58 acting credits to her name with the latest being Missing Link. She will also appear in the upcoming sequels of Avatar.

Zoe Saldana has a net worth of $14 million collected form her dancing and acting career. Although the exact salary figure of Zoe is unknown, it is the known fact that an average salary of a dancer is $29,822 per year and actor is $50,195 per years. So it is obvious that she is receiving more than average salary as she has a long time experience in this field. Some of her movies have earned a huge amount in the box office. Have a look.

Moreover, her husband who is also an actor has a net worth of $5 million. So the combined net worth of husband and wife is $19 million.